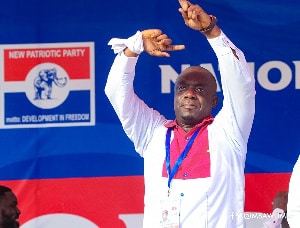 Justin Kodua Frimpong has tasked members of all Standing Committees of the party to put loyalty to the New Patriotic Party, NPP, above all other considerations.

Kodua was speaking on November 22, 2022, in Accra at the official swearing-in of all Standing Committees announced by the Stephen Ntim-led National Executives team.

“For various members of the committee, as you have sworn the oath, please, you should know that first and foremost, your first loyalty is to the New Patriotic Party and issues or matters that come before your committee should be kept at the committee level unless the party decides that it should come out,” he said.

In early November, the National Council of the party appointed members and chairpersons to serve on the party’s standing and ad hoc committees.

In a press release dated November 3, the appointment by the National Council was in line with the party’s constitution.

“Pursuant to Article 10(3)(6) of the New Patriotic Party (NPP) Constitution, the National Council, at its meeting held on October 5, 2022, and upon further consultations with relevant stakeholders, appointed the following persons to serve on the Standing and Ad hoc Committees of the Party,” parts of the release read.

The appointed members are to serve on the party’s finance, constitution and legal committees; organisation; research; disciplinary and communication committees.