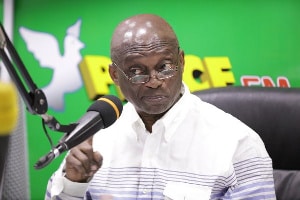 Recall that when officials from the Forestry Commission tried to stop corporate employees from mining, they were recently forced out of the forest reserve by a group of strong men.

Following the incident, Akonta Mining Ltd, a mining company owned by the governing ruling New Patriotic Party’s (NPP) Ashanti Regional Chairman, Bernard Antwi Bosiako a.k.a Chairman Wontumi, has been stopped by the Ministry of Lands and Natural Resources from mining in the forest reserve.

Although the company claims to have a mining lease to operate in the forest reserve, the Ministry however says it has no right to mine in the Tano Nimiri forest reserve.

“As indicated in the Ministry’s Press Statement, dated 30th September 2022, Akonta Mining Ltd has a pending application dated 25th August 2022, for a Mining Lease over an area within the Tano Nimiri Forest Reserve. That application has not been determined by the Minister, who is mandated by law, to grant or refuse such applications.”

“And for the avoidance of any doubt, Akonta Mining Limited has NO mining lease, mineral right, and/or permit to undertake any mining operations in the Tano Nimiri Forest Reserve, and steps are currently being undertaken to enforce the Minister’s Directive issued on 30th September 2022”, a statement by the Minerals Commission read.

Touching on the matter during Peace FM’s “Kokrokoo” discussion show, Kweku Baako Jnr berated the company for having intruded on the reserve when it knew it had no authorization.

“I have checked all the licences they hold from 2011, 2012 till date and it doesn’t have one for forest reserve. But the last one which the company’s application is pending, the one in August, it has not been approved but that is in the forest reserve. So, what was the company doing there?…They had no business being in that particular place doing anything because, first of all, they haven’t approved that licence”, he told host Kwami Sefa Kayi.

He charged the government to get to the bottom of the issue stressing, “this is tough call, a really tough call that again how this matter is handled would either enhance the integrity of the fight or diminish it”.

“The issue is not that they have applied for a licence to go into a forest reserve. The issue is that you don’t have a licence yet but the company is there. Why? What kind of impunity is that?”, he exclaimed.