It was just a mere congratulatory message and complements to the son of Ghanaian millionaire Dr. Osei Kwame Despite, who tied the knot in a glamorous traditional wedding.

Kennedy Osei, who also serves as the General Manager of his dadâ€™s media firm â€“ Despite Media, tied the knot with his girlfriend Tracy today (February 13) in a traditional wedding.

Hundreds of congratulatory messages have flooded the Internet but radio and TV host Akumaa Mama Zimbiâ€™s comment has incurred the wrath of social media users who are monitoring the ceremony.

She shared one of the videos from the ceremony with the caption: â€œWhen God blesses your parents this is what happens when you are marring. Sharp.â€

This statement angered social media users. Most felt it was uncalled for because every parent is blessed.

â€œI disagree with you on this one please… Your caption needs to be checked again ma. Thank you,â€ Benedicta Torsu, a Facebook user said.

One Wan Mocos insulted her: â€œYou claim u are wise but u lack common sense madam. U are among the parents who consider money or riches first when giving out ur [sic] daughter for marriage.â€

â€œDoes it mean that if a large number of people didn’t carry things to follow you during your marriage your parents are not blessed? Akumaa come again. All fingers are not the same OK but they are all design by God,â€ another user Armah-Amattey Lady Joyce asked.

Obviously disappointed Bernard Ofori Phillips stated: â€œAaaaaaarh am highly disappointed in you for such caption papaapa. What an indirect insult to we the poor parents.â€

â€œAwwww mama do u think only money is a blessing. Have you asked what they are going through in their house’s?,â€ Obaapa Akua asked.

Akumaa Mama Zimbi, who is the host of â€œOdo Ahomasoâ€ â€“ a relationship and marriage talk show â€“ is yet to respond to any of the comments. 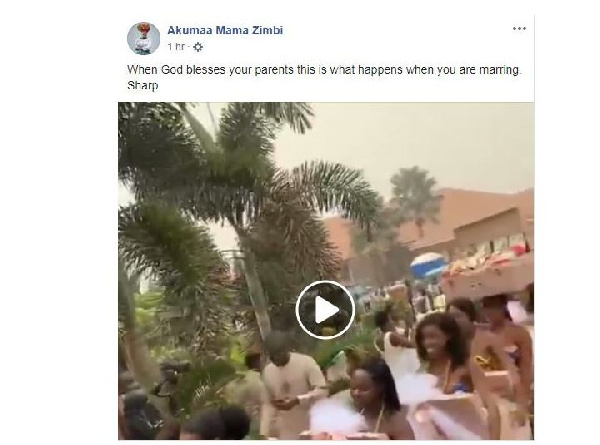