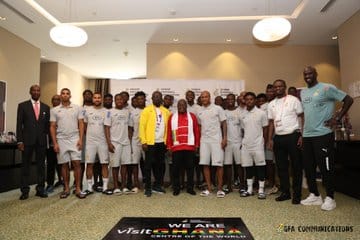 The Black Stars of Ghana are geared up for their clash today following President Akufo Addo‘s visit to their camp.

Akufo Addo left the shores of the country on Wednesday night and arrived in Doha early hours of Thursday morning.

He headed straight to the camp of the team to motivate them ahead of the much-anticipated clash later this afternoon.

Ghana, who are making their fourth appearance at the Mundial will face the European country at the 974 Stadium.

Otto Addo, who is the head coach for the side, and the playing body are determined to make a strong start at the global showpiece.

Ghana will hope to rewrite their story at the Mundial after exiting at the group phase in Brazil in 2014. The West African side also failed to qualify for the last edition hosted in Russia in 2018.

The best performance of the team was in 2010 in South Africa where they played in the quarterfinal.

The Black Stars after the Portugal clash today will face South Korea at the Education City Stadium in Al Rayyan.

Ghana will wrap up their group stage adventure with their much-anticipated encounter with Uruguay at Al Janoub Stadium in Al Wakrah.