A group calling itself Brotherhood of Anlo has admonished the host of Good Evening Ghana, Paul Adom-Otchere, to desist from further attacks on Togbe Afede XIV, the Agbogbomefia of the Asogli State, President of Asogli Traditional Area. The group in a statement expressed their unhappiness about Mr. Adom-Otchereâ€™s â€˜disrespectful, disparaging and discriminatoryâ€™ comment about the traditional ruler who hails from the Volta region.Describing Mr. Adom-Otchere as a â€˜tribal bigotâ€™, Brotherhood of Anlo said his conduct was indicative of the fact that he [Adom-Otchere] is a nation wrecker.The statement added that the journalist should rather be praising Togbe Afede XIV for his patriotic act rather than criticising him on TV. It further called on him to render an apology to the traditional ruler, Ewes and the Volta region at large before it is too late.â€œAt this time that our nation is saddled with issues of unemployment and revenue challenges, Paul should rather be praising Togbe for being patriotic by returning his ex-gratia to government and by extension the suffering people of Ghana due to the economic meltdown.â€œPoliticians and some rulers see it as an opportunity to loot the state for themselves and families. We at the Brotherhood of Anlo wish to advise Paul and his paymasters to refrain from such divisive acts before it is too late.â€œCan he talk about and Akan chief in the manner he is doing? The paymasters and sponsors of Paul Adom Otchere should advise him to withdraw his needless comments and apologise to Togbe and the people of the Ewe origin and the region as a whole,â€ parts of the statement read.Togbe Afede XIV in a statement dated June 6, 2022, confirmed that he had refunded over Â¢365,000 ex-gratia paid to him for serving on the Council of State between 2017 and 2020.He indicated that he felt uncomfortable with the money paid for part-time work which he received monthly salaries and other benefits.Togbe Afede mentioned that the refund was hinged on his â€œgeneral abhorrence of the payment of huge Ex Gratia and other outrageous benefits to people who have by their own volition offered to serve our poor country.â€However, the Host of Good Evening Ghana Paul Adom-Otchere has been unimpressed by the gesture accusing him of attending only 39 out of 242 meetings of the Council of State â€“ a claim the Asogli state has dismissed as a lie.Mr. Adom-Otchere countered that in the Thursday, June 9 edition of his show insisting that Togbe Afede attended only 16% of sittings of the Council of State.Meanwhile, Togbe Afede XIV in an interview with Accra-based Joy News said that the level of dishonesty of Paul Adom-Otchere who â€˜knows himâ€™ well really hurt him.Read The Full Statement from Brotherhood of Anlo 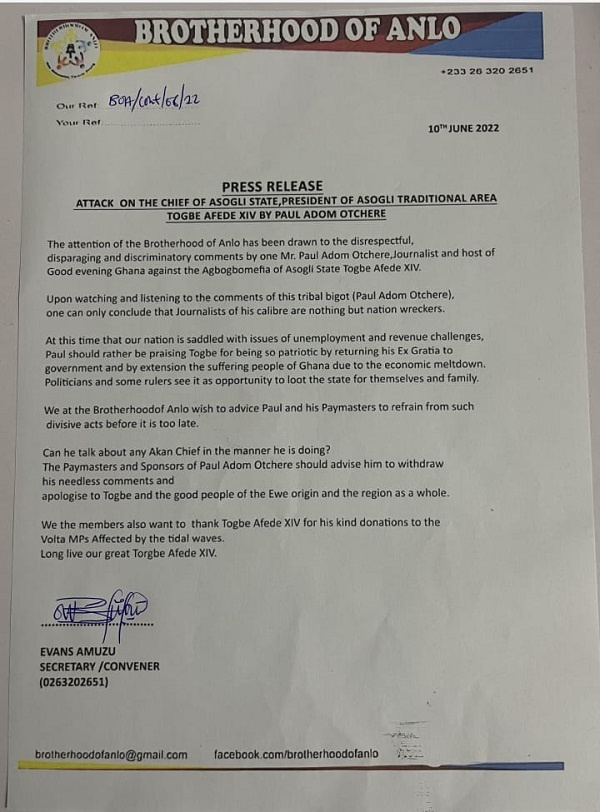 Why should I criticize Akufo-Addo on TV when I have access to him? – Adom-Otchere to critics (VIDEO)

Why should I criticize Akufo-Addo on TV when I have access to him? - Adom-Otchere to critics (VIDEO)

It’s not too late to be a lawyer – M.anifest on his career