Why “Good vibes only” can make you feel so bad 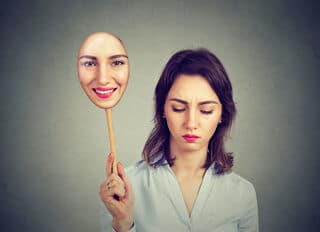 If we’re lucky, we’ve all spent time with the kind of open-minded, thoughtful, optimistic people who support us through hard times and encourage us to be our best selves.

But just as likely, we’ve encountered the other kind of “positivity”–the type of person with an obsessive focus on cheerfulness, who tells us to “buck up” instead of listening when we bring up a serious topic, which leaves us feeling alienated and disconnected (as I described in a previous post). However, the mechanisms of this kind of toxic positivity bear looking into more closely, as they often involve a tactic known as invalidation.

But invalidation isn’t usually a deliberate, mean-spirited effort to crush someone else’s independence. Toxic positivity, or the refusal to acknowledge another person’s unhappy or anxious feelings (due to a superficial adherence to optimism, such as a “good vibes only” attitude), is also an insidious form of invalidation.

One might say that positive intentions don’t always have positive effects: invalidation doesn’t always arise from bad faith. People who invalidate others’ feelings may legitimately believe that their efforts will help–like the person who says, “Don’t worry, you’ll find someone new,” when you’re in tears after a breakup.

You may have felt the temptation to say things like this–to offer reassurance in hopes of making someone feel better. Unfortunately, all too often, such a remark can shut them down by cutting off your empathy.

Relying on artificial positivity in close relationships runs a host of risks. By staying optimistic and bright and telling yourself things like “everything happens for a reason,” you’ll create your own world of artificially positive emotions. You’ll push away any bad (but real) feelings, making you more likely to attract the same artificial positivity from others.

Your relationships may become more superficial, as other people sense they cannot be real around you. If so, they’d only be following the rules you’ve set out: be positive instead of being yourself. You’ll make it impossible for friends or close others to come to you for help. And if, now and again, processing a bad experience can allow a person to change or to develop a new perspective, you’ll fail to help your friends grow in this way.

Some forms of artificial positivity may actively cause problems, too. If you’ve ever had someone advise that “happiness is a choice,” you might be familiar with the hurt that arises from a remark like that–the shame and guilt you may begin to feel at having negative emotions. It’s bad enough to be coping with something that makes you feel low, but being told by a close friend that it’s possible just to switch on happiness instead, can make you feel blamed and awful for feeling bad.

But as I’ve said previously, it is possible to change how you communicate to cut down on artificial, “toxic” positivity. First and foremost, if someone is trying to share something with you, let them speak–especially if they ask you to listen. Don’t try to shut off their negative emotions right away. Hear them out. As you do, try to acknowledge that they’re going through a difficult time. You might do this with words or only a sympathetic expression and a nod as you listen–in short, with compassion.

If you can’t offer practical help–if there’s nothing you can do to help them feel better–it may be appropriate to admit that it’s hard to know what to do or say. Also, try not to confuse empathy with agreement. You may not agree with everything they say or feel. You can still try to understand how they feel! Acknowledging that someone else is unhappy is not the same as endorsing their point of view or agreeing that they should be unhappy.

Try to take stock of your feelings as you listen; the more aware you are of what you’re going through inside, the more naturally you may be able to connect to your empathy. It’s okay to have negative feelings, even if you feel uncomfortable. It’s also okay–in fact, it’s right–to feel some of the sadness or worry that another person communicates.

Emotions are signals that can offer valuable information about your experience of the environment. That’s as true for you as it is for the person needing you to hear them out. Your negative feelings won’t go away until and unless you acknowledge and understand them.