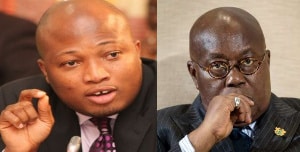 Finance Minister, Ken Ofori-Atta, in his presentation of the 2023 Budget Statement and Economic Policy in parliament on Thursday, November 24, 2022, announced an increment in VAT rate for the upcoming year.

But reacting to the announcement in a Facebook post, the opposition MP wondered how the current event is occurring under the presidency of Nana Addo Dankwa Akufo-Addo, who led a protest against VAT when it was introduced in 1995.

“Who could ever have imagined or predicted that Nana Addo Dankwa Akufo-Addo who led the fatal 1995 Kumepreko demonstration against the introduction of VAT under President Rawlings which tragically claimed the lives of Ahunu Ahonga & 5 others would today be increasing VAT by 2.5%,” he wondered.

According to the minister for finance, the increment in VAT will allow the government to raise funds to finance projects such as road construction.

“Mr. Speaker, the demand for roads has become the cry of many communities in the country. Unfortunately, with the current economic difficulties and the absence of dedicated source of funding for road construction, it is difficult to meet these demands. In that regard we are proposing the implementation of new revenue measures. The major one is an increase in the VAT rate by 2.5 percentage points,” the minister said.

In 1995, Nana Akufo-Addo and other members of the New Patriotic Party led what is described as Ghana’s largest demonstration in history.

Five protesters were killed during a protest against the then-government of Jerry John Rawlings’ decision to introduce VAT. Unidentified assailants fired into the crowd of protestors.