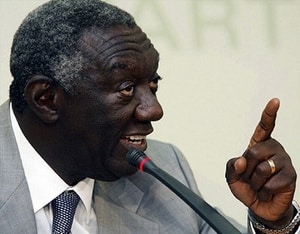 At the invitation of the then Prime Minister of Malaysia, Dr. Mahathir Mohamed, Ghana’s former president, John Agyekum Kufuor, experienced something in the southeastern Asian country that forever changed his mindset about presidential tenures.

Narrating how that came to be, during his engagement with the Institute of Economic Affairs (IEA) on Reviewing the 1992 constitution recently, Kufuor said that on arriving in the country he came face-to-face with two realities.

He said that after learning that Malaysia got its oil palm seedlings from Ghana, he arrived in the country to an even more eye-opening discovery of how well the country had utilized the ‘gift’ it got from his very own country.

“I was invited to Malaysia by Dr. Mahathir Mohamed, who was Prime Minister; I was president and it must have been 2005-2006 and it was a great eye opener to me. I had learnt that Malaysia took the oil palm seedling from here (Ghana) there. I got to Kuala Lumpur, the plane, as it was coming to land, you’ll see miles and miles of palm trees all over, and very modern agriculture.

“And then when I got there, probably, they just wanted to show me something, they took me to where they had refined palm oil into some oil that will be used even as engine oil. And then they used the husks for fertilizer for the palm trees, so every bit of palm.

“So, I said these people got this thing from us and we do not know how to do this. See what they are doing with it themselves. Then, at a point, he invited me to his offices in New Kuala Lumpur; the office is like a mosque, he took me to the rooftop, and Dr Mohammed, perhaps not taller than 5 feet… and then from there, I saw the layout of the city: the streets – beautiful, and the development,” he said.

President John Agyekum Kufuor also explained that having been quite surprised at the expanse of development and innovation that the Malaysians had used the oil palm seedlings for in their country, he asked Dr. Mohamed how they did it.

In response, he said the Malaysian Prime Minister asked him a question that jolted his mind so much, he came to the realization that there is the need for Ghana to relook at its constitutional arrangement for the tenure of its presidency.

“So, I gasped and said, ‘Oh, Mr. Prime Minister, since when have you been doing this?’ So, the man looked me up and down. The question he asked me was, ‘What’s your term of office?’

“I said, 4 years. So, he said back, what can you do in four years? By then he had exceeded 10 years and I’m not suggesting we go that way, but definitely, 4 years, he made the point forcefully that you don’t really create so much in 4 years,” he added.

Over 30k printed passports yet to be collected – Foreign Ministry