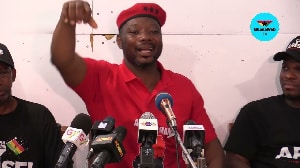 Mr. Mornah lamented that on the day designated to honor Kwame Nkrumah‘s birthday, the public was unable to access the Kwame Nkrumah Memorial Park.

Speaking at an event, held by the Convention Peoples Party (CPP) to commemorate Memorial Day on Wednesday, 21 September 2022, Mr. Mornah said: “I went to the Kwame Nkrumah Memorial Park, and when I got there this morning, it was difficult to go there because the contractor claims they have taken control of that site.”

“21st September has been declared a public holiday, and people are working at the site of Kwame Nkrumah and where Kwame Nkrumah is lying and the government of Ghana is happy and preventing citizens from visiting the tomb of Kwame Nkrumah,” he lamented.

He stated that the administration would face resistance if it tried to change the initial concept for building the Memorial Park.

“And their[government] attempt to impose other people that do not qualify to be at the Memorial Park, I sent a warning and let me repeat it here, if they make a mistake and put anything either than Kwame Nkrumah in the Kwame Nkrumah Memorial Park, we’ll bring that thing down,” the former PNC Secretary stated.

The Kwame Nkrumah Memorial Park in Accra was closed temporarily closed on Friday, 27 May 2022, for maintenance works.

Contractors are working to upgrade the memorial park to a standard that befits the stature of the former president and boosts the attractiveness of the park and the overall tourism performance of the country.