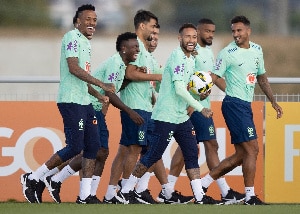 Like the Black Stars of Ghana, the Seleção Brazil held their final training session for today’s game in France.

With the full complement of their squad, coach Tite and his technical team wrapped up preparations by practicing set-pieces, and penalties and assessing the sharpness of their goalkeepers.

PSG star, Neymar who suffered a slight knock has recovered fully and took part in the training.

Just like the Black Stars who appear relaxed and confident, the Brazilians also had fun and had smiles on their faces.

The likes of Richarlison, Vinicius Jnr, Allison, Thiago Silva, and other stars participated in the exercise.

Meanwhile, trusted Brazilian newspaper Globo is predicting that coach Tite will go for a three-back system against Ghana.

Their predicted lineup has Liverpool goalie, Allison in post with Thiago Silva, Marquinhos, and Eder Miltao as the three center-backs.

In midfield, they go for a two-man midfield with Casemiro sitting deep alongside Alex Telles of Manchester United.

Vinicius Jnr and Raphinha both flank Neymar and Lucas Paqueta in the central midfield and central attacking midfield roles.

The lone striker is Tottenham’s Richarlison who per the report has been picked over Liverpool’s Robert Firmino.

The final training session before Brazil’s match against Ghana 🎥 pic.twitter.com/q9m4g44haE