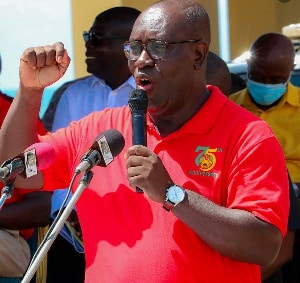 The Trades Union Congress (TUC) has stated it wants an end to the spectre of real wage losses next year as workers experience one of the greatest declines in real wages in recent years, with the national minimum wage currently dipping below US$1 per day due to significant cedi devaluation.

Speaking to the B&FT at a pre-budget event in Accra organized by the Ghana Employers’ Association (GEA), TUC General Secretary Dr. Yaw Baah noted that pay inequality and poor pay issues from the past still exist in the public sector.

He said in a presentation that workers on the Single Spine Salary Structure (SSSS) are receiving far less in pay compared to their counterparts on other pay structures in the public sector.

These concerns, according to the TUC boss, will occupy the Union’s pay negotiations in 2023.

“This will imply restoring the daily national minimum wage to the poverty line of at least US$1.90. It will also mean negotiating a base pay on the SSSS that is reflective of current inflationary trends,” Dr. Baah said.

He appealed to the Ministry of Employment and Labour Relations to ensure that the work of its Technical Committee be completed without further delays.

This year, government constituted a tripartite technical committee to make recommendations for a review of the SSPP.

Indeed, the incessant hikes in inflation have led to a general change in cost of living across the country.

Housing, water, electricity, gas and other fuels recorded inflation of 69.6 percent in October 2022.

Even though the minimum wage was increased by 8 percent in 2022, the unusually high inflation of 40.4 percent has washed-out any gains on wages.

In July, public sector workers received a Cost-of-Living Allowance (COLA) of 15 percent, but that has been dwarfed by current inflation hikes.

The Union however concluded that while the IMF programme will be key to resolving some immediate economic challenges facing Ghana, it will not address the country’s long-term development needs.

It therefore recommends government to: focus on transforming agriculture; add value to commodities; improve road and transportation networks; and improve access to and quality of education and health delivery.