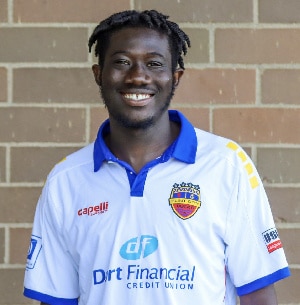 Eugene Quaynor, a deceased Ghanaian football player, was remembered by friends and sympathizers after he was killed in a car accident on September 28, 2022, in the United States.

Six days after his 23rd birthday, Eugene Quaynor passed away.

After a game, the deceased footballer was on his way home when a drunk driver slammed into him at a stoplight, setting the vehicle on fire.
Sadly, he passed away in the car.

The late Ghanaian footballer was referred to as the “epitome of the mission we strive for in our Athletic Department” by Oral Roberts University, where Quaynor attended school and served as team captain.

“He was a leader on the field as a captain of the men’s soccer team and had a spirit-empowered heart ready to lead and impact the world for Jesus. His infectious smile will be missed all over the ORU campus, but his spirit will live on as we will never forget #27.”

While some prayed for the Quaynor family and football team to stay strong during this difficult time, others also urged the school to retire the jersey number 27 to remember the late Ghanaian player.

Some of Quaynor’s friends in Ghana have also expressed shock in the sudden death of the footballer.

Woman who beat househelp to death was abusive – Report