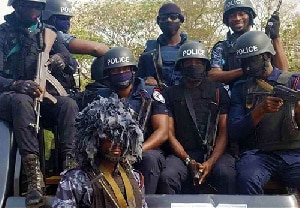 In the Ashanti Region’s Ejisu, a suburb of Kumasi, the Ghana Police Service has arrested 21 foreign nationals as part of its ‘See Something, Say Something’ anti-terrorism programme.

According to graphic.com.gh, the 21 suspects were arrested after they were reported by community leaders for exhibiting abnormal behaviors.

The report indicated that the community leaders in Ejisu reported the suspects to the police after they observed their suspicious activities for about a month.

One of the community leaders, Mohammed Ali, said that they reported the 21 foreign nationals because they were of the conviction that they were a security threat because of their actions.

“For several times, I entered and asked them, what are they doing? They said that they were learning. In the evening, you see them making phone calls, different phone calls, everybody making a phone call.

“Maybe they are trying to convince someone or I don’t know, so that is what they have been doing around here,” Ali is quoted to have said by graphic.com.gh.

Neither the Ghana Police Service nor the National Security has commented on the arrest yet.

The National Security Ministry, in May 2022, launched a Citizen Education Campaign, dubbed ‘See Something, Say Something, to help raise awareness and alertness on a possible terrorist attack in Ghana.

The campaign seeks to educate the citizenry to report any suspicious activities related to terrorism to the security agencies and it forms part of efforts to help deal with the terrorist threat in the West African sub-region.