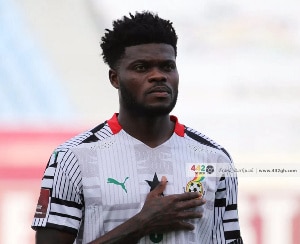 Black Stars head coach, Otto Addo has stated that his charges will cope without injured Thomas Partey in their game against Nicaragua on Tuesday, September 27, 2022.

Ghana will be without Partey who has suffered a knee injury and has been excused from camp.

According to Otto Addo, his tactical plan for the friendly tonight will not be affected by Partey’s absence.

“With the tactics, it doesn’t affect a lot because tactics involve the style of play and players with such abilities so I think tomorrow’s game we will be okay. Hopefully, Thomas will be healthy very, very soon,” said Addo in a pre-match presser.

“We didn’t want to take that risk in a friendly game to play him against Brazil but surely playing a player like him against a squad like Brazil would have been helpful,” he added.

The match comes off at the Estadio Francisco Artés Carrasco in Spain at 18:00 GMT kick-off time.

World Cup: I know what I need to do to stop Mbappe – Walker

Tema Station: We are not responsible for heap of rubbish at terminal – GPRTU