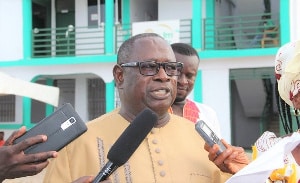 Cletus Apul Avoka, the representative for Zebilla East, has expressed worries over the timing of the NDC’s leadership change in parliament.

According to him, the party should have galvanized the party for the fight against the NPP to win the 2024 elections instead of making heroes out of nonentities.

His remarks come after the party decided to replace Minority Leader Haruna Iddrisu with Cassiel Ato Forson, MP for Ajumako-Enyan-Essiam.

Aside from Cletus Avoka, the Member of Parliament for Tamale Central also raised concerns about the party’s failure to involve the caucus in the leadership reshuffle.

According to Murtala Mohamed, the leadership reshuffle has caught everyone off guard, including those who are taking on new responsibilities.