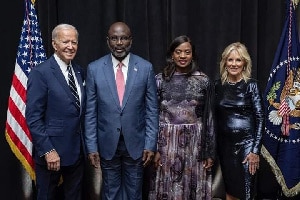 President of the United States, Joe Biden, on Wednesday (September 21) held a reception for a select group of Heads of States and government representatives at the American Museum of Natural History in New York.

The leaders present were in New York to attend the 77th United Nations General Assembly with the US president hosting the reception on the sidelines of the UNGA.

Also present was George Weah of Liberia as well as the Chairperson of the African Union Commission, AUC, Moussa Faki Mahamat.

All attending presidents and their spouses took photos with the Bidens – Joe and Jill – with the American flag and presidential flag against a black background.

“Kenya will continue expanding its strategic partnership with the United States of America to advance peace and prosperity in Africa.

“With Rachel at a reception hosted by the @POTUS during the 77th Session of the United Nations General Assembly, New York,” Ruto captioned his photo with Joe Biden.