‘There’s no hope; Akufo-Addo and Bawumia are under judgement’ – Sammy Gyamfi 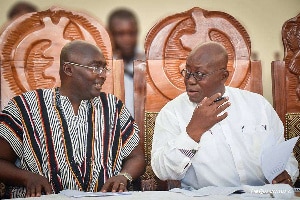 The National Communications Officer of the NDC, Sammy Gyamfi, has said that there is no hope for Ghanaians under the current  President Akufo-Addo and Dr. Mahamudu Bawumia government.

He explained that there is no hope because President Akufo-Addo robbed the 2020 elections, and he is now being punished by God, which is why he has been embarrassing himself since the inception of his second term.

Sammy Gyamfi, who was speaking in an XYZ TV interview monitored by GhanaWeb, added that the only way the current hardship in the country can be reverted is when this current government is booted out of power.

“There is no hope. President Akufo-Addo and Bawumia are under judgement. Only people with no spiritual discernment are unable to see this.

“Have you ever seen a Ghanaian president being booed in his own country? He is under judgement. His cup is full. God’s anger is on him. This is what happens when you take something that does not belong to you.

“You have killed 8 people because of power, and you think you will go scot-free. Nothing in the country is working. They don’t know what to do now. They have given up on the country,” he said in Twi.

He added that what the country is currently going through is because of the judgement of God on Akufo-Addo.

“We are suffering because when a country has bad leaders, its citizens suffer just like the cases in the Bible,” he added.

The effort paid off. I’m A Honky Tonk Girl reached number 14 on the country charts, and Lynn relocated to Nashville, where she was quickly snapped up by Decca Records.

She released her first Decca record, Success, in 1962, beginning an impressive stretch of hits that continued into the 1990s.

Lynn earned her first number one with Don’t Come Home a Drinkin’ (With Lovin’ on Your Mind) in 1966, and topped the US country charts another 15 times.

She recorded 60 albums in total, and was nominated for 18 Grammy Awards, winning three.