Washington issues a warning ahead of the US Vice President’s trip to South Korea, saying that North Korea might conduct a nuclear test while she is there. Ballistic missile tests by Pyongyang continue to ratchet up the critical situation.

North Korea has carried out over 30 missile tests in 2022 and US officials are warning that Pyongyang could use Harris’s visit as an opportunity to carry out a seventh nuclear test, and the first since 2017.

“We have made clear that such a test would result in additional actions by the US to demonstrate our ironclad commitment to the security of the Republic of Korea and to our Japanese allies,” an unnamed White House official told reporters during a background conference call last week.

“We have made clear how concerned we have been by North Korean provocations and destabilizing behavior, and a nuclear test would certainly be in that category,” the official added.

North Korea on Sunday test-fired a short-range ballistic missile into the Sea of Japan, one day before the US and South Korean troops began combined naval exercises.

Satellite images of North Korea’s Sinpo naval dockyards, on the east coast, suggest that a new submarine, capable of firing ballistic missiles, is about to be launched. 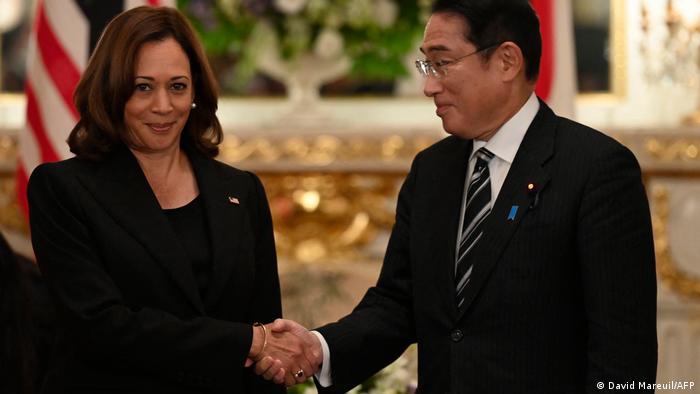 On Monday, the US and South Korea kicked off four days of joint military maneuvers with at least 20 warships and dozens of aircraft.

The 101,000-ton aircraft carrier USS Ronald Reagan is leading a US battle group made up of guided-missile destroyers and the USS Annapolis, a Los Angeles-class fast attack submarine. It is the first joint US-South Korea exercise with an aircraft carrier since 2017.

In a statement, the South Korean military said the drills are aimed at showing “powerful resolve to respond to North Korean provocations” and improving capabilities to perform joint naval operations.

On Monday, Kim Song, the head of the North Korean mission to the United Nations, said that US-led exercises are “an extremely dangerous act” that could push the region “to the brink of war.”

“The security environment of the Korean Peninsula is now caught in a vicious cycle of tensions and confrontation due to the growing hostility of the United States and its following forces against the DPRK [North Korea],” he added.

During a visit to South Korea by US President Joe Biden in May, intelligence officials warned that North Korea was “preparing” for a nuclear test during the visit.

Biden’s visit was not greeted with any North Korean weapons testing, nuclear or otherwise. However, hours after the US president ended his Asia trip, Pyongyang test-fired three ballistic missiles.

This time around, analysts suggest North Korean leader Kim Jong Un could consider putting off a nuclear test in order to not overshadow Chinese President Xi Jinping and the upcoming Chinese Communist Party conference. But that is not a given.

“There are limits to Pyongyang’s self-restraint,” said Leif-Eric Easley, an associate professor of international studies at Ewha Woman’s University in Seoul.

“The Kim regime sees itself in an arms race with South Korea and may be looking to make up for a lost time after its pandemic struggles,” he underlined.

“Significant North Korean missile tests can contribute to national pride and send international signals. Pyongyang could be making a show of strength while a US aircraft carrier is visiting South Korea for defense exercises,” the expert said.

“North Korea’s nuclear and missile programs are in violation of international law, but Kim tries to depict his destabilizing arms buildup as a righteous effort at self-defense,” and tests are part of a “long-term campaign for advancing offensive military capabilities,” he added.

The bigger picture for Asian security

Yakov Zinberg, a professor of international relations specializing in East Asian affairs at Tokyo’s Kokushikan University, told DW that the latest saber-rattling on the Korean Peninsula “is all part of a sequence of actions and reactions among interlocking alliances that inevitably encompass the Taiwan situation and Ukraine.”

“Harris’s visit is a message that the US remains committed to its allies and partners in the region and is a warning to North Korea not to get any closer to Russia,” he added. North Korea has denied US reports that it has been providing weapons to the Russian military as sanctions squeeze Moscow’s supply.

Kim Jong Un threatens to use nuclear weapons if attacked

On Harris’s itinerary will be a visit to the Demilitarized Zone (DMZ) dividing North and South Korea, which symbolizes tensions on the Peninsula since the Korean War ended in 1953 without a peace treaty formally ending hostilities.

“Pyongyang’s provocations are an effort to take advantage of the global turmoil at the moment and Harris’s visit is largely designed to underline the strength of the alliance with South Korea,” he said.

In an interview earlier this week, South Korean President Yoon Suk-yeol said that in the event of a conflict breaking out around Taiwan, North Korea is expected to launch an attack against South Korea.

“I agree with that assessment,” said Park, adding that China and North Korea recognize the strategic advantage of simultaneous conflicts on the Korean Peninsula and Taiwan and the challenges that would pose to the defending states.

“The US and South Korea must engage in discussions and draw up a detailed action plan for this sort of scenario,” Park said.