The Ghanaians who were misled to remove Mahama, now want to oust Akufo Addo 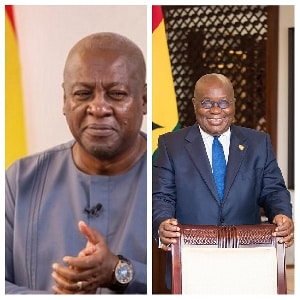 It’s really sad that those NPP politicians, such as Bawumia, Akufo Addo, and Ken Ofori-Atta, who were obsessed with power and tricked Ghanaians into thinking John Mahama was dishonest and unable to lead the country, have now experienced the bitterness of their lies and dishonesty.

The majority of Ghanaians, including many NPP supporters, want Akufo Addo out of office because he has shown himself to be not just a liar and an ineffective leader, but also to be extremely corrupt.

Ghana has reached a critical point where the extreme hardships, high crime, and unemployment rates, along with the nation’s crumbled economy, depressed currency, and pervasive corruption, have taken control of people’s lives and forced many tribal bigots and some NPP supporters to admit that if they continue to support tribalism, Ghana will never advance to provide better living conditions for the poor.

The wreckage, bloodshed, corruption, and destruction brought about by Akufo Addo and his NPP government, are now visible to the people who were misled into thinking that Mahama was the most dishonest and corrupt leader in Ghana’s political history.

How is it possible that a man who had pledged to make Ghana’s economy the best by protecting the public’s money would rather choose to destroy the country in such a horrible manner, without a solution, and even legalize corruption in the nation?

I’ve been referring to Akufo Addo’s legalization of corruption in Ghana because if one pledges to fight corruption, any politician or judge involved in scandals must be forced to lose their jobs immediately and sentenced to prison.

However, Akufo Addo has chosen to include individuals like Eugene Arhin, Charles Bissue, Kwasi Anin-Yeboah, and Paul Adom-Otchere, who were involved in serious corruption scandals, in his government instead. That is how corruption became sanctioned by the government.

Imagine what the late politician Kwadwo Owusu Afriyie, well known as Sir John, was able to amass in the shortest amount of time. What does it matter if a person has the whole world but loses his soul?

What will be the advantage of such selfishness, which includes robbing the poor or stealing the public’s money, including COVID funds by transferring into either private or foreign bank accounts? Politicians, judges, and other senior government officials abandon the bible after taking an oath with it and proceed to do contrary to what is written in the holy book.

I firmly believe that many politicians don’t know what is actually written in the Bible that they use to swear the oath before taking office because of their desire and want for power, which the majority of politicians exhibit through their appetite for accumulating a fortune.

If they do, politicians would not lie and cheat in order to defeat rival political parties. The suffering of Akufo Addo and his NPP politicians will never cease because the word of God cannot be ridiculed.

Is it accurate to say things that tend to go around return? My opinion is that if the Bible claims in Proverbs 19:5 that “A false witness will not go unpunished, and he who breathes out lies will not escape,” then it is very likely that Akufo Addo or the NPP, in general, are receiving the punishment they deserve for lying and saying many things that were false against John Mahama in order to win power. The NPP government has done worse than what was alleged about him.

Akufo Addo failed as a president because he has so many criminals, including judges, journalists, and religious leaders, backing him. More importantly, in spite of the crime and destruction, he has brought upon our beloved country, as well as his indecent relationship with a Ghanaian-Canadian nurse, Serwaa Broni, Ghanaians continue to blame Mahama for the nation’s problems.

Why are they unwilling to criticize the president and why was Mahama treated so badly?

The president has run out of options and solutions and is unsure of what to do as a result of the gloomy and stagnant state of affairs in Ghana. Akufo Addo can’t control what he says since he is an arrogant man. Any wise leader who recognizes his failure must remain silent and work to resolve the issues, instead, the president promised to “ensure the NPP retains power before he leaves office.”

If you are a concerned Ghanaian and consider how the NPP government has destroyed Ghana, including the so-called economist Vice-President Bawumia, beginning with the collapse of the banking institutions, printing new high currencies into an already unstable market, and destroying the livelihood and businesses of thousands of Ghanaians with the implementation of the failed E-Levy, you’ll know that the NPP government has long gone to the opposition.

Therefore, every Ghanaian, regardless of their level of education, should be interested in knowing what the NPP plans to do to maintain that power and prevent it from happening.

If the president, Nana Akufo Addo, says that he would make sure the government remains in place before leaving office, or if any unthinkable NPP politician says that the party will break the 8th cycle, which is inconceivable, it is clear that they are working for a sinister end.
Akufo Addo is not merely a selfish, inexperienced politician; he also lacks empathy, morality, and integrity.

Ghanaians witnessed how he disregarded criticism about the use of expensive jets for international travel. It was already too late when he saw the seriousness of the trouble into which our country had descended. People who formerly vowed never to visit the International Monetary Fund and even criticized John Mahama for doing so are now licking their wounds.

I wasn’t surprised when I read that some of the ignorant NPP politicians, such as Ernest Owusu Bempah, were blaming John Mahama for the NPP’s decision to approach the IMF. What might savvy Ghanaians expect from such a government? A nation’s capability to combat corruption depends on its ability to remove individuals responsible from their positions and bring them before the law.

It’s time for Akufo Addo to acknowledge the fact that he has failed miserably in every endeavor, including his pledge to combat corruption. Including dishonest politicians and media in his cabinet, means he has endorsed corruption.

Such a regime is not what Ghanaians desire. Eugene Arhin and Paul Adom-Otchere should be imprisoned or Akufo Addo should resign; otherwise, the NPP will not receive even one percent of the vote in the 2024 elections, and nothing the corrupt Jean Mensa and Kwasi Anin-Yeboah will do would help the NPP administration succeed.

DISCLAIMER: Independentghana.com will not be liable for any inaccuracies contained in this article. The views expressed in the article are solely those of the author’s, and do not reflect those of The Independent Ghana