The Ayew brothers – What do they have to offer? 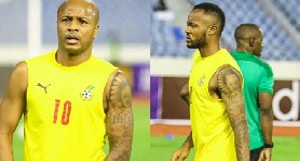 Two of the three sons—Andre Dede Ayew and Jordan Ayew—of one of the greatest players to have ever represented Ghana’s Black Stars, the maestro Abedi Ayew, seem to consistently incite conflict among Ghanaians whenever the Black Stars are involved in a match.

Some fans contend that they no longer play well enough to merit call-ups. These calls ought to go to fresh faces who are more capable and ready to compete. Others believe that since they are two of our most crucial players, their call-ups are merited.

There shouldn’t, in my opinion, be such a significant rift over the brothers’ selection for Ghana’s World Cup team. I’ll explain why.

The older of the two, Dede Ayew, made his international debut for Ghana in 2007 while still a teenager. He has now progressed to captain the Black stars. He has 109 caps and has scored 23 goals for his country. Nobody embodies commitment and passion more than Dede Ayew, the team’s current captain.

He is constantly willing to put in a lot of effort and sweat to ensure the success of the nation. A player’s call-up to his national team is always an honor, and Dede always gives his best effort when he receives that call-up. His leadership skills and drive to inspire his teammates to step up their game when they are struggling are excellent qualities to have on the team.

Many spectators mock him and label him “choirmaster” for his clapping and hand motions on the field, failing to recognize the psychological impact it may have on the players. As team captain, he also serves as the coach’s mouthpiece. When a player makes a mistake that costs the team a goal or wastes a significant scoring opportunity, he serves as the initial source of encouragement for the players.

This demonstrates the caliber of player he is and the range of experience he brings to the team. No other squad member has this much international tournament experience. Dede Ayew has played for teams who have won championships and teams that have faced relegation throughout his club career.

He worked hard for victory in relegation battles and scored several crucial goals when it mattered most. Although the Black Stars group includes opponents like Portugal, Uruguay, and South Korea, it is never impossible. He is a very good option off the bench when the stars are chasing the game, even if he is not named in the starting 11. His heading ability is very underrated. He can move well off the ball to attack the proper gaps for crosses and even tower over larger, taller defenders to score goals.

The youngest of the three Ayew brothers, Jordan, made his senior debut for Ghana in a 2010 victory against Swaziland in an AFCON Qualification match. Since then, he has consistently played for the national side. He has 83 total caps for the Black Stars and has scored 19 goals, 4 less than his brother Dede. Jordan is a dependable player for Crystal Palace at the club level, starting 10 games and substituting in the other 3 this season.

This demonstrates his level of involvement. He plays a very tactical role in assisting players like Wilfried Zaha to succeed, as can be shown by looking at some of his games this season. When Jordan Ayew is played on the right wing, Zaha remains high and wide as the danger on the counterattack, therefore giving Jordan greater defensive responsibilities. When Palace decides to defend in a mid or low block, Jordan tucks into midfield as needed. He is a crucial member of Patrick Viera’s team thanks to his tactical prowess.

Jordan can be utilized similarly or more offensively for the national team because he can also play as a striker. When switching plays or struggling to build out of defense, his holdup play might make him a viable target for long balls. There is no truth to the many Ghanaians’ complaints that he is sluggish and lazy.

He is among the most diligent forwards you will come across. His dedication and perseverance make him a very special profile to have in front of the press. Whatever your personal opinion of the brothers may be, if they are not called up, their very specific profiles will be missed.

With so many new players on the team, Andre Dede Ayew’s leadership, wisdom, and passion are desperately needed. Players who have participated in international competitions before and have excelled should absolutely be included because more than half of the players will be making their debuts there.

Jordan Ayew also possesses the tactical adaptability to enable the coach to make specific tactical modifications throughout a game as needed.

All in all, you don’t just get rid of your captain, your most experienced players, and two of your top scorers when heading into a tournament. It is essential to gradually replace older players who aren’t providing their best while giving new players time and encouragement to step into those large shoes as the team continues to establish a solid foundation for the years to come. New and young players are frequently overwhelmed by too much pressure.

To sum up, the Ayew brothers always play with passion for the Black Stars because they love their country. Whatever the opinions of the supporters, if they are not included in the squad, they will be missed during the world cup.