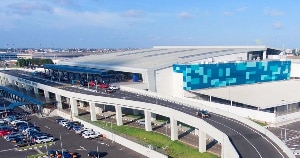 The continuing depreciation of the cedi against major trade currencies and the high cost of fuel are hurting players in the aviation business, which is increasing the price of travel.

In comparison to the US dollar, the cedi has so far lost more than 30% of its value, while the price of aviation fuel has increased by more than 100% since the year’s commencement.

Of an interview with B&FT conducted during the first flight of Passion Plane to Sunyani, the airline’s corporate affairs manager, Samuel Takyi, stated these two causes are leading to the increase in air tickets because the industry cannot bear the burden’s immensity alone.

“We are confronted with two very strong headwinds which have to do with depreciation of the cedi and increasing aviation fuel prices. Over 98 percent of our transactions are in foreign exchange but our tickets are sold in cedis. So, once you covert the cedi to dollars you take a hit right there.

“With the aviation fuel, for example in May we purchased fuel to the tune of US$350,000 for our operations. In June it shot up to US$750,000. From beginning of the year to now, we have had an increase of 112 percent in aviation fuel. These are external factors beyond our control, so we will just respond to the market as and when things change,” he said.

It must be recalled that the industry was among the hardest hit at the height of the pandemic, as restrictions on travel and movement ground the activities of airlines to a halt.

However, just when activities seem to start bouncing back, the sector has been confronted with the two aforementioned strong challenges. Players in the industry are therefore calling on government to address these challenges in order to protect the aviation sector.

Speaking at the event, Minister for Transport, Kweku Ofori Asiamah, assured the sector that government is doing its best to ensure the currency is stable enough to help drive down costs for the industry.

Speaking in Sunyani at a brief ceremony to launch Passion Air’s inaugural flight to the city, Managing Director of the airline, Samuel Ato Hagan, expressed delight with the fact his outfit is first to operate in the region after the airport’s inauguration some few weeks ago.

He assured passengers of the airline’s resolve to offer the best of service to them and ensure their safety. Further, he urged hospitality and tourism companies in the region to take advantage of the airline’s operations in the area to promote their business.

The transport minister further commended Passion Air for taking the bold step to ply the Accra-Sunyani route, especially when the airport was only recently inaugurated and there is no empirical data to assure the company of high passenger traffic.

In Bole, a student flees from suspected kidnappers

Police offer ¢100k bounty for information regarding the Wa murderers

Police offer ¢100k bounty for information regarding the Wa murderers