The 2023 budget will be discussed in Parliament on Tuesday 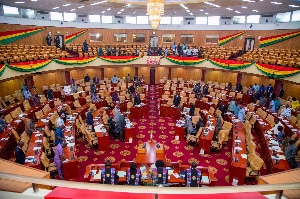 On Tuesday, November 29, 2022, members of Parliament (MPs) will start debating the 2023 budget statement.

The debate is expected to focus on finance, agriculture, trade, and industry on November 29, communications, energy, roads, works, housing, sanitation, and environment on Wednesday, and health, youth and sports, education, tourism, culture, and chieftaincy on December 1 are other areas of concern, according to deputy majority leader Alexander Kwamena Afenyo-Markin.

A two-day workshop was organized over the weekend to empower lawmakers and offer them insights into the 2023 budget as they ready themselves for the debate on the floor.

Already the minority in parliament is demanding a review of some revenue mobilization measures outlined in the budget such as scrapping of the daily minimum threshold exemption for E-Levy and further reduction in the rate to 0.5%.

In an address at the post-budget workshop for MPs in Ho over the weekend, Minority leader, Haruna Iddrisu warned decision to freeze public sector employment and cutting down of numbers admitted into teaching and nursing schools will further exacerbate the already worst unemployment canker.

The Tamale South MP warned though his side is willing to support government’s effort in resuscitating the economy, the 2.5% increment in VAT rate will be treated with the NPP’s Kume Preko demonstration against introduction of the tax in 1995 in mind.

Majority leader Osei Kyei-Mensah-Bonsu however called on the NDC MPs to support government’s effort in addressing the economic crisis arguing the NDC also in the past opposed things that have ended up benefiting the country such as the discovery of oil in commercial quantities.

Some aspects of the budget such as the intent to review the 1.5% e-levy downwards and the introduction of a 2.5% VAT have already triggered discussions within the public.

Businesses have opposed the new tax policy, while mobile money users have criticized the removal of the threshold on transactions.