Thanks to Akufo-Addo, Ghana’s economy is in the tank – Prof. Hanke 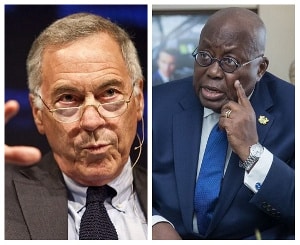 According to Steve Hanke, founder and co-director of the Institute for Applied Economics and professor of applied economics at Johns Hopkins University, Ghana’s economy is currently in free fall.

The Ghana Statistical Service calculated the inflation rate for September to be 37.2%, which is in contrast to Prof. Hanke’s estimate of inflation.

In a tweet sighted by GhanaWeb, the economist reiterated his point that it is only a currency board that can help stabilise the depreciation of the Ghana cedi against the US dollar.

“Thanks to Pres. Akufo-Addo, #Ghana’s economy is in the tank. Today, I measure Ghana’s inflation at a stunning 109%/yr. Without a currency board, like the one the Gold Coast had (1913-1958), debt default is just around the corner,” Prof Steve Hanke tweeted.

Prof Hanke’s assertion that a currency board can stabilise the cedi has been reaffirmed by Dr. John Kwakye, Director of Research, Institute of Economic Affairs (IEA).

He told 3news in a report that a currency board-type monetary system can give the cedi lasting stability but warned that installing the currency board must be done progressively.

“I agree with Prof. Hanke that only a currency board-type monetary system can give the cedi lasting stability. We should, however, move progressively towards it. The full modalities can be worked out.”

Ghana’s inflation rate according to the Ghana Statistical Service has moved from 33.9 percent in August 2022 to 37.2 percent in September 2022.

This is a 2.0 percent month-on-month increase from the 33.9 percent rate recorded in August 2022.

Kayserispor’s Bernard Mensah out for four weeks due to injury