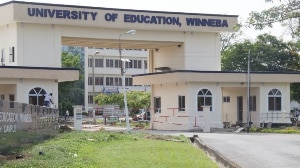 The Ghana Police Service fired teargas on Friday, September 23, 2022, to disperse final-year students of the University of Education, Winneba (UEW) who were demonstrating against authorities over failure to release their academic results.

The students blocked roads, leading to the school in protest, after management failed to show up for their scheduled meeting over discrepancies in their results both online and on the notice board.

Per a Graphiconline report, the students, after waiting for some time, with no sign of the meeting happening, went on a rampage, broke down signposts and blocked some roads on campus.

The police who were then called upon were unable to control the students and therefore called for reinforcement.

This resulted in the firing of teargas to disperse the students.