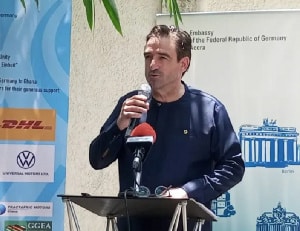 The current issues and challenges the nation is facing must be used by the government and the investor community to tap into promising regions and industries, according to Daniel Krull, the German ambassador to Ghana.

In his opinion, the success of the nation’s recovery depends on identifying potential areas, investing in them, and utilizing them.

“The situation in Ghana has been altered by external causes. The COVID-19 outbreak and the conflict between Russia and Ukraine have hurt the energy sector.
The laws governing interest rates have also had an impact on Ghana’s capacity to repay its debt.

“There are crises internally and externally, but I would like to express optimism. There are always chances in times of crisis, and I would encourage Ghanaian partners not to only look at the dark side but also look on the promising part,” he said.

“The Russian-Ukraine war has caused enormous trouble in the energy supply for Europe, and has forced it to redesign its energy matrix at a much faster rate than was planned.

“One main element of the new energy matrix for the European industry sector will be related to hydrogen power – and this brings me to Ghana, where there is huge potentials of untapped renewable energy sources, enormous hydropower sources – and all these could be harnessed,” he added.

He revealed that his outfit is putting together a group of interested investors and linking them with possible off-takers in Europe, in the hope of having a private sector-driven process in the field.

He added that given the soaring price and shortage of fertiliser, it opens opportunities for local producers – thus encouraging Ghanaian investors and companies to look into that possibility.

“There are also complaints about the rising cost of imports, so I think it is time to look for import substitution and how the country can increase the amount of locally-produced products, especially in the field of agriculture and food processing. There are a lot of discussions going on regarding the possibility European industry might diversify resources. This again must open opportunities for Ghana and its industries,” he indicated.

He revealed that there is an upcoming joint economic commission slated to take place in Accra this month.

The Ambassador is confident the country can thrive under The African Continental Free Trade Area (AfCFTA) if it ensures a trained workforce and maintains quality products.

The World Bank has said AfCFTA presents an opportunity for member-countries to reduce poverty, broaden economic inclusion and boost growth, despite the possible initial challenges of implementation.

Full implementation of the agreement, according to the Bank, will boost regional income by 7 percent to US$450billion; lift 30 million people out of extreme poverty, and another 70 million people from moderate poverty.

It is anticipated that the trade bloc will further spur wage gains for women by 10.5 percent compared to 9.9 percent for men, while making African countries more competitive – a situation that will propel innovation and growth.