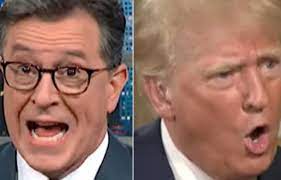 Share on FacebookShare on Twitter
Stephen Colbert spotted what may have been the wildest moment in a Donald Trump interview. His comment was truly bizarre ― even by the former president’s standards ― and it wasn’t even the one getting all the attention.
During an interview this week with Fox News host Sean Hannity, Trump claimed that he had the power to declassify documents with his mind. But Colbert noted that Trump said something even crazier, telling Hannity that the FBI may have searched his Mar-a-Lago home looking for former secretary of state Hillary Clinton’s emails.“That’s so crazy, he confused Sean Hannity,” Colbert said. “And Sean comes pre-confused.”

“At this point, he’s just throwing out magnetic conspiracy theories at the refrigerator to see what they spell out: ‘Um, maybe they were looking in my basement for the Sasquatch who shot JFK with Hunter Biden’s laptop with his partner the chupacabra who hung Jeffrey Epstein with Barack Obama’s long-form birth certificate chemtrails.’”