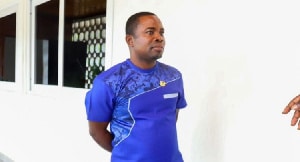 Mr. Gabriel Gyamerah Sarpong, an employee of the Ministry of Land and Natural Resources, was given a 15-month prison term for fraud by false pretense by the Accra High Court.

Based on his own plea, Mr. Sarpong was found guilty. On the charge of impersonating a public official falsely, he entered a not guilty plea.

Mr. Muda Ade Lawal, the convict’s attorney, asked for a non-custodial punishment and said that Mr. Sarpong was a good citizen and IT expert before the devil drove him into vice.

He claimed that if he received a jail sentence, he would be housed with experienced criminals and would fare worse.

The convict’s attorney claimed that because he was sober and repented of his behavior, he entered a guilty plea.

“Tamper justice with mercy to hand him non-custodial sentence,” he added.

He said the convict had a wife and two children and if given custodial sentence, his wife and children would have problems.

The Court adjourned the matter to October 5, 2022. The prosecution was asked to file disclosures and witness statements.

Assistance Superintendent of Police (ASP), Mr Evans Kesse told the court that the complainant was George Mireku-Duker, a Deputy Minister of Lands and Natural Resources.

He said sometime in December, 2021, the convict contacted a witness in the case to meet so they could talk about a business deal.

The prosecution said the following week, the witness met the convict and told him that the business was about mining and since the witness had been to various mining sites in the country, he could best execute the task.

He said same month, the convict called the witness on phone and told him that the Deputy Minister had authorized that the witness could mobilise his men to operate as such.

The Prosecution said the convict then gave a fake MTN number 0244916900 as the Deputy Minister’s contact number, through which he could call when he needed him.

The witness then mobilised his men and went to Obuasi, met the Police and called the MTN number accused gave to him as the Deputy Minister’s number for the said Minister to communicate with the Police for confirmation.

He said the convict, who responded as the said Minister, told the Obuasi Divisional Commander to accord the Team any assistance needed.

He said the witness after their operations realised cash over two hundred thousand Ghana cedis (GHS200,000) and sent same to the convict who had impersonated as Deputy Minister.

ASP Kesse said the witness after operating at Obuasi decided to proceed to Manso Nkwanta for another operation and met the Municipal Chief Executive (MCE), where the Witness told the MCE about his mission there and tried reaching out to the Deputy Minister on the MTN number given to him by the convict but there was no response.

The Witness met with the Deputy Minister on September 13, 2022, and he revealed that he had been working at the mining sites with his permission.

The prosecution said that the Deputy Minister denied knowing about it and sent for the guilty party, who was then turned over to police after being questioned.

In his investigation caution statement, the convicted person admitted to the crime and said that he used some of the funds obtained from the witness to buy a black Elantra saloon and put some of it toward the purchase of his Amasaman building.