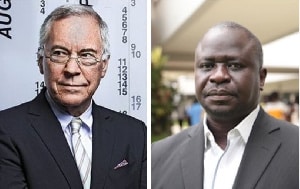 According to Johns Hopkins University professor of applied economics Steve Hanke, the Ghana Statistical Service is incorrect in saying that his calculation of Ghana’s inflation has a “serious weakness.”

Samuel Kobina Annim, a statistician at the Ghana Statistical Service, asserts that my measure of inflation for Ghana has a “serious shortcoming.”
Wrong. Prof. Annim ought to read some of the academic literature.

He told the media at the October briefing on the nation’s inflation that the CPI method adopted by the Statistical Service is consistent with international practice and superior to Prof Hanke’s Purchasing Price Parity Module (PPPM), adding that Prof Hanke’s PPPM is only based on the exchange rate.

“The key difference here is that the CPI approach necessarily requires that you collect data on three variables: prices, quantities and the expenditure weight of these items, and this is at sharp variance with Steve Hanke’s purchasing power parity.

Ghana’s inflation rate according to the Ghana Statistical Service has moved from 33.9 per cent in August 2022 to 37.2 per cent in September 2022.