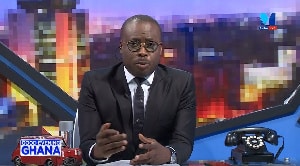 Paul Adom-Otchere, host of Good Evening Ghana on Metro TV, has taken investigative journalist Manasseh Azure Awuni to the cleaners over a recent tweet on the September 24 booing incident that President Akufo-Addo suffered.

Addressing the incident in the editorial segment of his show on Tuesday, September 27, Adom-Otchere advanced that Manasseh’s reference to chiefs as part of people who can for selfish reasons sing the praises of the president was unacceptable.

“Mr President, for their selfish goals, chiefs, paid praise singers and sycophants will continue to sing insincere praises of you. But what you heard at the #globalcitizensfestival is the truest voice of the people, a referendum on your regime. You have two years to salvage it,” the tweet of September 24 read.

He went on to cite the case of Togbe Afede, whose picture with Manasseh he projected on the screen, stressing that Togbe will not praise sing for Akufo-Addo because of his stature and for other reasons.

He suggested that Manasseh respected Togbe Afede as a chief, so why would he create the impression that all chiefs are praise singers of the government. “Respect Togbe Afede, I know you respect him.”

He continued that for someone from a traditional area, Bongo, “there is a chief over there, I don’t know him but I believe you respect him,” he added.

Adom-Otchere requested a photo of Manasseh be projected on his touchscreen following which he admonished the journalist to repent from his ways and desist from denigrating chiefs.

Thousands of patrons were at the Black Star Square to witness the concert that had a number of local and international artistes performing.

As host of the event, the president was called upon to give his remarks, which happened to be a prepared speech that lasted over six minutes.

The booing happened when he started his speech saying: “The whole world is in Ghana today.”

What started initially as people showing their disapproval of his presence on the stage, turned into loud clapping and chanting of the words: “away, away…,” the president, however, stayed the course and delivered his full speech.

As if that was not enough, people on social media latched on to the development to mock the president.

The voices of millions of Global Citizens around the world are driving lasting change towards sustainability, equality, and humanity by taking action every day.

The Global Citizen Festival started as a music festival where fans take actions to end extreme poverty in order to earn free tickets to attend.

Watch how Asamoah Gyan performed this hit song at the gym