Shatta Wale never made me; I was rather part of his rise – Achipalago clarifies 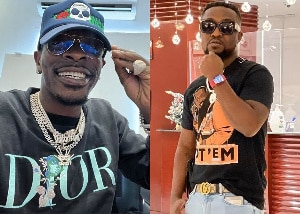 Famous Ghanaian social media commentator and singer, Archipalago has detailed his role in the rise of Shatta Wale’s music career despite the claim the latter rather shot him to fame.

His terms which he was famed for using inspired Shatta, he claimed. The musician after reaching out to Archipalago informed him of plans of capitalizing on his terms.

To this effect, Archipalago is standing up against the claim that he rather benefited from the Dancehall musician due to their association.

“What they say is just stories. I will never accept that claim, why on earth? Never in my life. Can Shatta Wale make me?

“I was part of Shatta’s rise. After the release of ‘Dancehall King’, his next hit was ‘Kakai’ and I played my role, and I promoted the song. After ‘Kakai’ he released ‘Bie Gya’ and that was my term. My name was in that song and I equally promoted it. Shatta Wale saw what I was doing on social media and hit me up in my DM…at that time, I was making waves. He saw my impact and hit me up…after our meeting in Ghana, he told me that he was going to use my name in his song, shortly after, he released ‘Kakai’,” Archipalago disclosed in an interview with radio presenter, Fiifi Pratt on Kingdom FM.

He further alleged that Shatta Wale owes him some monies for his use of his popular slang despite giving him 400 dollars some years ago.