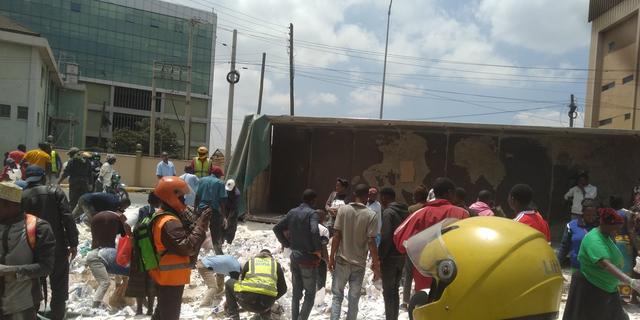 Amateur clips are being shared on social media showing people taking bales of maize flour off a lorry that overturned on a major highway in Kenya’s capital, Nairobi.

The crowd of looters include motorists, motorbike taxi operators and pedestrians.

The cause of the accident is unclear and there were no police officers on sight, according to the footage.

A local journalist is among those who has tweeted footage from the scene:

The prices of basic food commodities like maize flour and wheat flour, potatoes, vegetables and fruits have been rising in the country – attributed to a combination of external and domestic factors.

Last week the government scrapped a subsidy on petrol which has increased the retail price to an all-time high.

$50,000 Powerball ticket spent over a month forgotten in winner’s purse