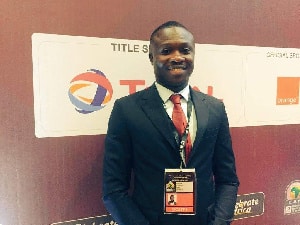 Head of sports for Angel Broadcasting Network Saddick Adams,  has hauled the Member of Parliament for Adansi Asokwa, Kwabena Tahir Hammond over the coals for a statement that sought to denigrate and belittle the Ghanaian youth.

Sports Obama, as he is fondly called stung the lawmaker in a social media post for still wallowing in the archaic mentality that wisdom is the preserve of the aged.

He rejected the position by KT Hammond, emphasizing that contrary to KT Hammond’s ill-informed position, the youth of the country have actually demonstrated intelligence and verve to drive the country.

“KT Hammond is quoting some 12th-century proverb to impugn that young people are empty-headed.

“Some of these old men think the youth are just aimless and thus parliament and other offices must be occupied by grey-hairs. Yet they’d go and kneel before Emmanuel Macron for loans”, he said.

In his reaction to the hooting of President Akufo-Addo at the Global Citizen Festival held over the weekend, KT Hammond expressed his disapproval of the conduct of the persons who booed the president.

According to him, the youth should not be fooled into thinking that they have the knowledge to lead the country.

“We don’t live in a country and do that. Let’s be humble. Whatever we do, the president is the executive head of this country. When he came, he didn’t say anything. It wasn’t even a political platform.

“He only said the event has brought the attention of the world on Ghana and the youth started booing at him. We will always tell the youth to be humble. When a matter comes up, we say we are going to consult elders. We don’t say we are coming to consult the youth whose heads are like coconut.

“We consult the elderly on matters because they are wise. But because of politics, we do anything with the elderly. Let it even be a political platform that you can heckle but it wasn’t even a political rally.

“The youth should respect the elderly. We shouldn’t let it be that because of politics we can insult everyone. It’s not possible for the youth to be left to manage the affairs of the country.

“They won’t know how to do it in the first place. You don’t understand. You are galivanting about in this town with beard, nothing is in your heads,” he said in the Twi parlance.

President Akufo-Addo was among high dignitaries who graced the Global Citizen Festival which took place at the Black Square in Accra over the weekend.

When it was his turn to deliver a short presentation, a section of the crowd began to chant and clap ‘away,away….’.

KT Hammond is quoting some 12th century proverb to impugn that young people are empty-headed.

Some of these old men think the youth are just aimless and thus parliament and other offices must be occupied by grey-hairs. Yet they’d go and kneel before Emmanuel Macron for loans