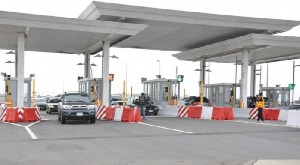 According to Kwasi Amoako-Atta, the Minister of Roads and Highways, this is the case.

He said that the toll collection, when it is reinstated in 2023, will take place electronically rather than manually as it once did.

Additionally, he stated that the government would be assisted in improving the nation’s roadways by the increase in road tolls.

“While we want outstanding and good roads, we paid the lowest toll in the entire world.
We must be willing to spend more if we want nice roads. The fifty pesewas and one cedi will no longer be paid.
Away from home, tolls are even more expensive “Myjoyonline.com quotes him.

Meanwhile, the finance minister announced the abolishment of road tolls in the 2022 budget. Despite opposition, road tolls were not collected for the entire 2022 financial year.

Making a U-turn, the government told parliament that “the fiscal policy measures to underpin the 2023 Budget for consideration and approval by Parliament include the reintroduction of tolls on selected public roads and highways with a renewed focus on leveraging technology in the collection to address the inefficiencies characterized by the previous toll collection regime.”

However, Amoako explained that “road tolls have not been cancelled or abolished since the law to collect tolls is still there.”