Results of the reduction in the cutoff for girls in STEM 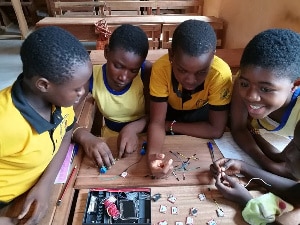 According to Bernice Mpere-Gyekye, national coordinator for the Ghana National Education Coalition Campaign (GNECC), the government’s affirmative action policy, which has lowered the cut-off point for girls who want to pursue different courses in the sciences at the senior high school (SHS) level, is starting to produce fruitful results. More girls have recently been admitted to category “A” schools.

According to her, the initiative which is targetted at achieving Sustainable Development Goal five (SDG-5) – Gender equality, and empowering all women and girls, to end all forms of discrimination against all women and girls everywhere, has not only encouraged more girls to opt for the sciences but is also closing the gender inequality gap at the second cycle level.

“At a point in time, we realised that we were achieving gender parity in education but at the basic level only because once the girl-child rises up in education, a lot of socio-cultural factors draw her back at the SHS and tertiary level.

“So, the Science, Technology, Engineering, and Mathematics (STEM) initiative is a programme that came in handy to help bridge the gap as government took a policy decision to drop the cut-off point for females to be able to enter the male-dominated space,” she said.

Nonetheless, she emphasised that the drop-out rate at the SHS level is still high; therefore, more should be done to encourage girls, as well as made it flexible for them to transition into the STEM field.

She commended government for the construction of girls’ STEM SHS’ across the country, emphasising that the schools would provide a more structured environment for female SHS students.

Ghana has seen a rapid transformation and great improvement in girls’ access to education during the last decades. However, despite having reached almost complete gender parity in enrolment in primary and secondary education in 2019, girls are still under-represented in some subjects, and many still do not complete their education.

Sub-Saharan Africa is the lowest-scoring region when it comes to gender parity in education, with an overall score of 54 percent against a global average of 75 percent. Not only in sub-Saharan Africa, but worldwide, there are still numerous barriers to girls’ education stretching far beyond mere access.

While it is believed that Ghana will soon achieve gender parity at the second cycle of education level; it is not only enough to achieve that, but also important for the girl-child to engage in Science, Technology, Engineering, and Mathematics (STEM), Madam Mpere-Gyekye, emphasised.

Apart from the Free SHS Policy, the improvement in gender parity is due to government’s commitment to ensuring educational gender parity through a demonstrated Education Strategic Plan (2018-2030) with a priority on gender equality.

The Educational Strategic Plan (2018-2030) will help improve equality through improving access, and help girls reach higher levels of education while operationalising new guidelines on addressing pregnancy among adolescent school girls with a primary focus on prevention, socio-emotional, and learning support.