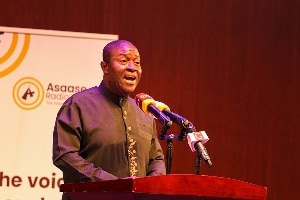 Over 90 lawmakers from the government’s New Patriotic Party demanded Mr. Ofori-Atta’s dismissal last week, but the President stepped in and instructed them to wait until the Minister finished Ghana’s agreement with the IMF (IMF).

However, some people have questioned the President’s decision asking in the unfortunate incident that the Finance Minister is incapacitated, will the President not find a suitable replacement?

Responding to the calls for Ken Ofori-Atta‘s dismissal, Nana Akomea says, “if you decide to appoint a new Finance Minister, it will take another two months. From nomination, when you nominate, it has to be there for 21 days or something before Parliament can sit and so forth. Even if you speed up the process, it will still cover one month”.

“Has the IMF complained that the Finance Minister is not doing well? If you remove him, it’s just aesthetics?”, he also asked.