Protests on the streets of Ouagadougou – report 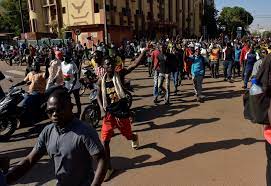 On Friday, several young people took to the streets of the Burkinabè capital, Ouagadougou, following reports of gunfire in the early hours, the privately-owned Wakat Sera website reported.

“Youths, claiming to be members of some civil society movements, on Friday 30 September, stormed some of the streets of the capital of Burkina Faso, calling for a ‘massive mobilisation for the total liberation of the national territory’,” the report said.

It added that the demonstrators said that a “full-blown coup d’etat” had taken place, and demanded the release of Lt-Col Emmanuel Zoungrana, who has been detained since the time of ousted President Roch Kabore’s rule.

The BBC has not been able to independently confirm that there was a coup attempt but a government official, speaking anonymously, told us that a mutiny had taken place.

On Thursday, hundreds of people held a protest in the western city of Bobo Dioulasso, to demand the resignation of interim President Lt Col Paul-Henri Damiba.

The protesters were blaming him for the chaotic management of the security situation in the country – which is facing a jihadist insurgency.

A mutiny that took place on 23 January was linked to the detention of Lt-Col Zoungrana.

Healthcare delivery is not a one man show – Vice President PSGH

Healthcare delivery is not a one man show – Vice President PSGH