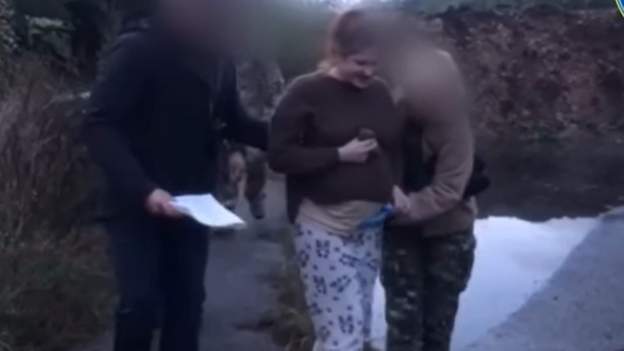 A Ukrainian doctor named Mariana Mamonova who is more than eight months pregnant is one of the detainees whom Russia has freed.

She can be seen in a prisoner swap video that Ukrainian authorities made public on Wednesday.

She was being held in the notorious Olenivka prison camp in the unrecognized Donetsk People’s Republic after being captured in April in Mariupol.

Speaking to the BBC before her release, her husband spoke about his fears over the well-being of his wife and unborn baby – the couple’s first.

“A baby can’t be kept in those conditions, so they could just take it away,” Vasilii said.

Mariana was reportedly held under extremely difficult conditions at the prison camp.

A fellow prisoner, Anna Vorosheva, said she was in a cell with more than 20 other women when she first arrived and had to sleep on the floor.

“Straight away, everyone tried to help her – giving her food, making sure she got fresh air,” Ms Vorosheva, who was released in July, told the BBC.

Eventually, she was moved to a smaller room with fewer people, and her cellmates ensured that she was able to sleep on one of the room’s two beds each night.

At first, Mariana assumed that she would be a priority for a prisoner swap. But as her due date at the end of September approached, she began to fear she would give birth in captivity, and became increasingly worried that her baby would be taken from her.

Frustrated at the lack of news, her family decided to go public with Mariana’s story in August, drawing attention to her case in the Ukrainian media.

Still, weeks passed with no progress, but finally – just days before she is due to give birth – her family received the good news that she had been released.