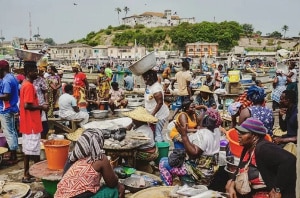 The third quarter of 2022’s final month showed a significant decline in the business climate in Ghana’s private sector.

The output decreased considerably and at the fastest rate since the pandemic’s beginning in March and April 2020.

However, at a slower rate, new orders also fell substantially.
For the third month in a row, businesses reduced their headcounts in response to weak demand conditions.
Despite this, businesses were optimistic about their longer-term output growth projections.

The S&P Global Ghana Purchasing Managers’ Index™ (PMI®) posted below the neutral value of 50.0 for the eighth month in succession, indicating a deterioration in business conditions. At 45.6 in September, down from 45.9 in August, the latest reading was the lowest since April 2020.

The latest deterioration was centred on contractions in both output and new orders, with the former recording a marked and accelerated decrease.

Ghanaian companies reported weak client demand as a result of higher prices which weighed on output growth. Output fell at the third-steepest rate since the survey began in January 2014, surpassed only by those seen during the height of the pandemic in March and April 2020.

With firms scaling back output levels for the ninth month running, further signs of spare capacity emerged in September. Backlogs have now fallen in each month since the start of the year with the rate of decline the quickest since March. Panel comments indicated reduced workloads allowed firms to work through their backlogs.

With demand conditions weak, and backlogs falling, firms sought to reduce their costs in September by cutting headcounts. Staffing levels have now fallen for three months in a row, although the latest decline was mild.

Lower orders at suppliers allowed vendors to speed-up their deliveries at the end of the third quarter. The extent to which lead times shortened was the third most pronounced in the series, surpassed only by those seen in the previous two survey periods.

Lower activity levels led Ghanaian firms to scale back on their purchasing activity, a fifth successive month in which this has been the case. Moreover, the rate of decline was the quickest in this sequence. Stocks of inventories also fell, albeit only marginally.

Rising costs were passed on to clients in the form of higher selling charges. In fact, the increase in output prices was the second-quickest in the series, surpassed only by that seen in the previous survey period.

Finally, despite weak recent performance, firms were hopeful that output growth would return over the coming 12 months. Concerns over price pressures weighed slightly on optimism, however.

Shreeya Patel, Economist at S&P Global Market Intelligence, said: “Ghana’s private sector faced another challenging month of trading, rounding off the third quarter of 2022 with a sharp deterioration in business conditions. A number of factors were blamed for the decline including weak cedi-dollar exchange rate movements, and a general reluctance to spend at Ghanaian companies.

“Recent months have proven to be challenging, and currency weakness has struck a heavy blow to Ghana’s economy. Overall input costs rose sharply, while selling prices were raised at a near-record rate.

“That said, Ghanaian companies focused on the positives and were generally upbeat about their expectations for output growth. There were hopes that the recent price pressures would stabilise, and demand would eventually improve.”