by Isaac Appiah
in Business 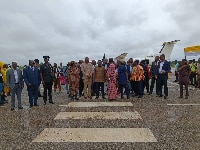 Passion Air, a domestic airline operator with the greatest route network in the nation, will start operating flights to the Sunyani Airport, which is expected to significantly increase demand for domestic air travel in Ghana.

According to the company, the flight heralds the launch of Passion Air’s Sunyani route, which will operate three times each week on Mondays, Wednesdays, and Fridays and Sundays for a GHS600 cost.

Since President Nana Addo Dankwa Akufo-Addo this year officially opened the first stage of the renovation and expansion of the Sunyani Airport, this flight marks the first commercial flight to the airport.

“The airline industry is an important contributor towards economic development and must be protected. It has increased easier and faster movements of goods and passengers within the country as well as creating jobs both directly and indirectly for the populace.

Air transport is no longer a luxury but an important component of economic development where time is of essence. The journey time by road between Sunyani and Accra is about 6 – 7 hours, by air this is within an hour. That saves a whole lot of product hours which could be utilized elsewhere productively,” he said.

He bemoaned the impact of the cedi’s continuous loss in value against major trading currencies and the high cost of fuel on the cost of air fares.

“Just when we were beginning to get some respite from the effects of the pandemic, we encountered, two very strong head winds in the form of the depreciation of the Ghana Cedi against the major foreign trading currencies and the continuous increase in aviation fuel prices. This has had adverse effects on us as a business. Our ticket sales are in Cedis but over 98% of our transactions with vendors and suppliers are in foreign currencies. The price of aviation fuel seems to be flying just as high as our aircraft. The price of aviation fuel has increased by 112% from the beginning of this calendar year. This is a major challenge for us as a domestic operator,” he noted.

Minister for Transport, Kwaku Ofori Asiamah, noted that, “the domestic air travel market had recovered and increased by 70percent from 2020 to 2021 after a drop of 38% was experienced from 2019 to 2020 due to the impact of the COVID-19 pandemic.”

He commended the Ghana Airports Company Limited (GACL) and the Ghana Civil Aviation Authority (GCAA) for taking steps to ensure continued operations in the sector despite the impact of the COVID-19 pandemic.