Parliamentary and other boycotts since 1992: are they truly in the national interest or just for partisan retaliations?â€”Episode 2

In the last episode (Episode 1), we explained the constitutional basis of State of the Nation Addresses (SONAs) given by the President of Ghana. We cited article 67 of the Constitution as well as Order 53 (1c) and 53 (1d) of the Standing Orders of Parliament to buttress our submissions. That Episode also showed the slight difference between a boycott and a walkout.

The various walkouts and boycotts ever staged by both the NDC and NPP together with the underpinning reasons for such protestations were well tabulated for ease of understanding and reference. A miniature conclusion was drawn based on the promise that Episode 2 (this episode) would be published. Now, here we go.

Distribution Of Boycotts And Walkouts By The NPP And The NDC

In the case of the NPP, they had formed a government only three (3) times in the Fourth Republic, from Kufuor to Nana Addo yet they have staged 9 (about 37%) of the total boycotts and walkouts that I have come across. From 1992 to 2020, the NPP had been in opposition for 16 years and the NDC had tasted opposition for 12 years yet the NPP had fewer boycotts and walkouts than the NDC. The table in episode 1 also shows that the NPP is the pioneer in leading boycotts and walkouts in the Fourth Republic. It may be submitted therefore that it was the NPP that taught the NDC how to boycott and walk out of parliamentary proceedings. However, the NDC had come to master the game more than the NPP. Figure 1 depicts the distributions more vividly. 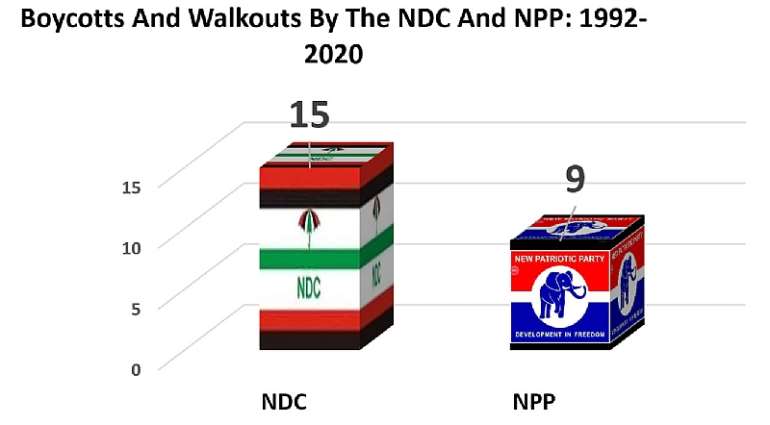 Are The Boycotts And Walkouts Truly In National Interest?

In almost all the boycotts and walkouts by the NDC and NPP Ghanaians witnessed in the Fourth Republic, the reasons cited are more partisan rather than nationalistic. However, the ulterior motives are masked with the expression that the boycott was to lessen the effects of the economic hardship Ghanaians are going through or to protect the public purse. If it is so, then does it mean that the MPs in the Majority whose party is in power always agree with the decisions of their colleagues within the executive arm of government? Why are the boycotts and walkouts always staged by the Minority and not the Majority? Perhaps economic hardship in Ghana is only seen through the Minority eye and the Majority eye is perpetually blind to it.

The ordinary Ghanaian is being misled by both the NPP and the NDC to think that one of these parties is more for the welfare of the people and the protection of the public purse than the other. For now, I can only be proven wrong whenever we see Majority MPs boycotting proceedings because of an issue raised by their own party that runs the Cabinet. To the NPP and the NDC MPs, a topic for debate is bad enough to walkout from or to boycott all because the Executive formed by its political opponent introduced it. How can we develop the country sustainably with this cynical orientation and attitude? Surprisingly, whenever the Executive introduces a benefit package for MPs, the two sides of the House quickly rally behind it. No walkouts at this juncture.

Boycotts and walkouts from parliamentary proceedings are globally accepted and they have become a political norm in the Fourth Republic of Ghana. In addition, mindful of the reality that both the NDC and the NPP are not innocent of boycotts and walkouts in the House, the verbal attacks on the NDC for walking out from the Chamber during Nana Addoâ€™s second SONA was uncalled for.

The media reported for example that Hon. Ursula Owusu-Ekuful, Communication Minister and NPP MP attacked the NDC members verbally for boycotting the SONA.

To my mind, granted that this is not the first and it will not be the last boycott of SONA or any other parliamentary proceedings, Hon. Ursulaâ€™s vituperations are unacceptable and I hope her party brings her to order because she is fond of such attacks at the least opportunity. It is not as if the NPP had not taken such a disciplinary action before. I recall vividly for example that under President Kufuor, the NPP dissociated itself from certain unprintable comments Ms. Grace Omaboe (Mame Dokuno) made during a political rally organized by the party and covered live by the media.

There is one interesting or should I say funny thing I have observed about some political actors in both the NPP and the NDC. Whenever their party is in power, some of these politicians tend to think and act as if they will forever be in power so they become arrogant not only towards their political opponents but also towards the masses and electorates. Meanwhile, prior to coming to power, these same political actors would fake humility by playing Ludo with the masses, plaiting hair at beauty salons, eating kenkey at market squares, pounding fufu at â€œchop barsâ€, boarding trotro etc. It is funny how they quickly turn themselves into dramatists just to win power and after winning power, they focus on trivial things that will not develop the nation. No wonder the country is facing plethora of challenges highly attributable to ineffective political leadership. Leadership is cause, everything else is effect. So Prof. Addae said and it is true.

A Member of Parliament in Ghana must not only prefer to be addressed as Honourable just for the fun of it, it also behoves him or her to act honourably, especially in public. Political leaders must inspire followers by nationalistic conducts and not by insults and needless propaganda.

Must The NDC Be Allowed To Debate The SONA They Walked Out From?

Regarding the last Thursdayâ€™s walkout by the NDC from the Nana Addo given SONA, the question has arisen as to whether or not the NDC Minority MPs should be allowed to take part in the debate of the SONA. Even the Majority NPP MPs, are divided over this question. The NPP MP Hon. Ursula Owusu-Ekuful maintained that the Speaker should not allow the NDC MPs to debate the SONA because they (the NDC) did not listen to it and therefore they lack the moral ground to debate an address they boycotted. Contrariwise, the Majority Leader, Hon. Osei Kyei-Mensah-Bonsu (also NPP MP) disagreed with Hon. Ursulaâ€™s position. He argued that any attempt by the Majority to prevent the Minority from debating the SONA would amount to preventing them from performing their legal functions. He, however, upheld the view that the NDC erred by boycotting the SONA. The unanswered question is that did the NPP erred in the past (21st February 2013) when they staged a similar walkout from John Mahamaâ€™s SONA? It was even on this occasion that the NPP described the NDC as stealers depicting that the NDC stole the electoral verdict in 2012 or rigged the 2012 presidential election. After that boycott, the Daily Graphic reported the following day that the then Minority Leader, Hon. Osei Kyei-Mensah-Bonsu (Now Majority Leader) justified the NPP walkout by asserting that â€œThe Minority knew the state of the nation and did not need the President to tell them the situation.â€ In response to whether or not they earned and should be paid salaries that month, Hon. Kyei-Mensah-Bonsu retorted that the NPP Minority boycotted SONA and not Parliament so they were working at Committee levels. Even when the 2013 national budget was laid on behalf of the same John Mahama as President, the NPP was part of its debate and approval by the House. Meanwhile, the 2013 budget was laid in the House five clear months before the Supreme Court gave its ruling on the presidential petition case in August 2013. After all the NPP in 1992 boycotted the consultative assembly that drafted the 1992 Constitution but donâ€™t they use the Constitution today? Did they not go to the Supreme Court in 2012 under article 64 of the same Constitution?

In my view, the discussant aftermath of similar boycotts in the House in the past should be the cardinal principle in 2020 once the Constitution and the Standing Orders of the House are silent on what to do. Based on precedence in the House therefore, to debate or not debate the 2020 SONA is the decision of the NDC alone.

Regardless of the moral or legal justifications for boycotts of parliamentary proceedings or walkouts during such debates, the ultimate reason must be nationalistic rather than partisan. The reason must be one that serves the national interest and not merely justified by the arrest of a communication officer of a political party (NPP) or imprisonment of a member of a party (NDC) who was given a fair hearing in court.

Again, oneâ€™s political opponents must not stage such boycotts and walkouts merely to retaliate for similar actions in the past. It is true that MPs are elected largely on political party tickets but they ultimately represent constituents so they must not obey cynical partisan instructions to the detriment of affairs of state and for that matter their electorates.

Both the NPP and the NDC had ever boycotted national affairs so one party must not play the holier- than- thou gimmicks at the public gallery as if they had not done so in the past. Ghanaians are discerning so they can go back to analyse certain propagandas from a historic perspective just as I have done now. We need a new a paradigm shift in our body politics where a spade will be called a spade and not a big spoon, irrespective of the MPâ€™s party affiliation. So far, I salute Hon. Kennedy Agyepong of the NPP for coming out to even disagree with his own party several times. People describe his disagreements with his own party (the NPP) as a traitorous act but in that regard alone, I call him a national hero who speaks his mind on issues. He does so whether or not his party or the NDC is the one at fault. That is the hallmark of a nationalistic thinker.

Woman runs mad after being dropped off by suspected ritualist -[Video]

Woman runs mad after being dropped off by suspected ritualist -[Video]