One shot fatally in a clash between police and the youth at Kenyasi No. 2 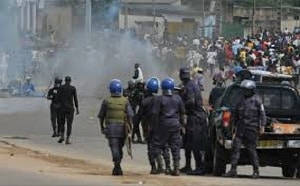 A bloody clash between the youth of Kenyasi in the Ahafo Region and the police in the area has led to the death of one person.

The incident is said to have happened after the police officers reportedly stationed at Newmont Mining Limited clashed with the youth at Kenyasi Number 2 in the Ahafo Region.

According to sources, a personnel from the Formed Police Unit and Counter-Terrorism Unit stationed with the Newmont company had an argument with a motor rider, an occurrence which led to the shooting of one person.

His death precipitated an uprising which led to the shooting of four additional persons.

Following  the incident, the indignant youth besieged a bridge between Kenyasi No.2 and Ntotroso road in protest.

Meanwhile, the Ghana Police Service is yet to officially comment on the matter.