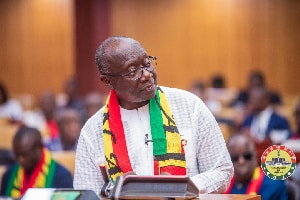 He said that Ghana’s spiraling debt levels were due to the Finance Minister, Ken Ofori.

“This finance minister is just interested in borrowing money on the bond market since it benefits him indirectly, you know what they are interested in.
In terms of borrowing all these Eurobonds, his company is at the bottom.
He has borrowed $9 billion from the market over the course of four years, and Data Bank profits from each bond he issues through sales of real estate and other assets, according to Mahama.

NDC flagbearer, John Dramani Mahama, has taken a swipe once again at the Finance Minister, Ken Ofori-Atta over what he describes as unnecessary borrowing.

The Finance Minister, he said, is only interested in borrowing money from the bond market because he benefits from it indirectly. He asserted that Ken Ofori-Atta’s Data Bank has been used as the special purpose vehicle for any governmental contract.

Mahama said Ken Ofori-Atta has borrowed an amount of $9 billion in 4 years.

In an interview with veteran journalist, Kwesi Pratt Jnr in Tamale Saturday, the NDC flagbearer said “This finance minister, you know what they are interested in, all he’s interested in is going on the bond market and borrowing because he benefits from it indirectly. His company is at the bottom of borrowing all these Eurobonds. He’s borrowed 9 billion dollars from the market in 4 years and for every bond he floats, Data Bank makes money out of it through properties and other things.”

He also attributed the economic hardship of the economy to Ken Ofori-Atta’s regular borrowing which he uses to fund budgets and other governmental projects.

Comparing events as they happened under his tenure to current trends under the Akufo-Addo government, Mahama claimed the NDC did not borrow a penny to finance the 2016 budget.