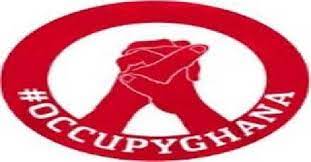 Pressure group, Occupy Ghana has petitioned the Right to Information (RTI) Commission to order the Lands Commission to provide details on all public lands that have been released to individuals.

The group in their petition addressed to the Executive Secretary of the RTI Commission said the move had become necessary because the Lands Commission had frustrated attempts to access the information.

Among others, the group wants a list of all public lands over which the government’s ownership or control has been relinquished, and the names of the persons to whom those lands have been released; the respective sizes and locations (suburbs, towns/cities and regions) of all such lands; and the conditions of release, whether free, sale, lease or licence.

It also wants to know “If the land has been leased, the amount of rent paid or payable; and Any other amounts paid to or received by the government, if any, for each such transaction”.

Occupy Ghana argues that the Commission flouted the law when it allegedly returned some public lands to the original owners in compliance with Articles 20(5) and 20 (6).

“It is a notorious fact that some public lands have allegedly been returned to the original owners in a purported compliance with Article 20(5) and (6) of the Constitution, contrary to Supreme Court decisions that those provisions do not apply to lands acquired before the Constitution came into force,” the statement said.

“Further, OccupyGhana’s checks with both the Lands Ministry and Lands Commission have confirmed that contrary to article 258 (2), there is no government policy that authorises these alleged returns of lands to purported original owners. This would raise serious constitutional questions over the propriety of the alleged return of lands, since the Lands Commission, acting alone, has no power to treat the trust property of all Ghanaians in this manner by purporting to return such lands to alleged original owners. This also raises serious constitutional issues as to whether or not the Lands Commission is in breach of its constitutionally imposed fiduciary and accountability duties”.

The group added that after several frustrations it had resolved that “unless and until compelled by the Right to Information Commission to do so, the Lands Commission will keep coming up with one unsustainable excuse after another”.

It said the most recent excuse, which gave a lot of cause for concern, was the claim that they required the advice of the Attorney-General “on our request in the light of the provisions of the Data Protection Act and the Right to Information Act”.

“It is in the light of the above, that on 2 June 2022, OccupyGhana requested from the Lands Commission, an inventory of all public lands alleged to have been returned to their original owners since the coming into force of the Constitution. We made this request in the exercise of both our right to Information under article 21 of the Constitution and our right to be accounted to as Ghanaians, the ultimate beneficiaries of those lands, under article 36(8).

“Unfortunately, the Lands Commission, while pretending to be gathering that information for us, is using every conceivable trick to frustrate our constitutional rights stated above. The reasons for not giving us the information to date has ranged from a demand that we name an individual with whom the Commission would deal, to asking for time to compile the information from the regions, to asking for a meeting to discuss our concerns.

Read the petition below; 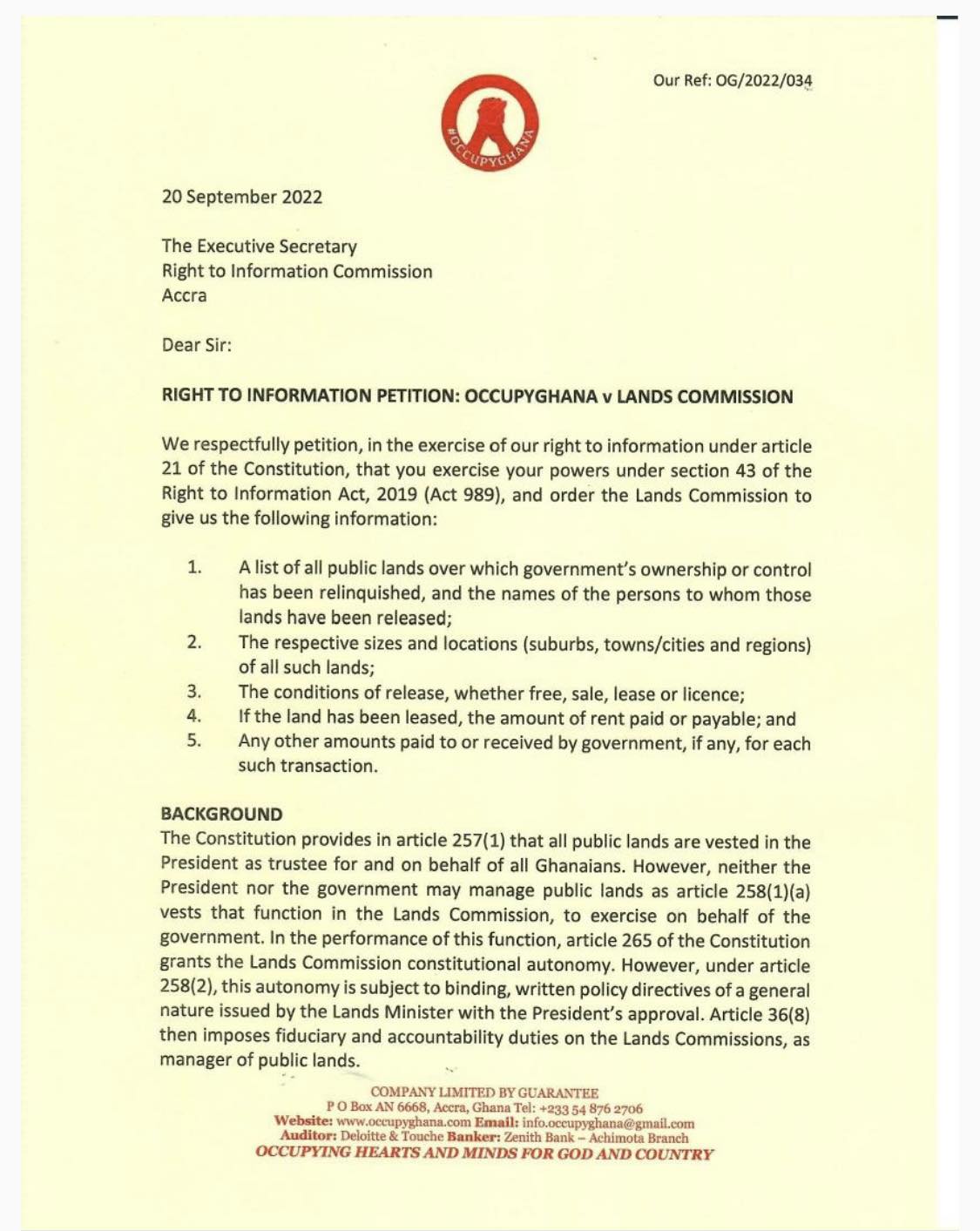 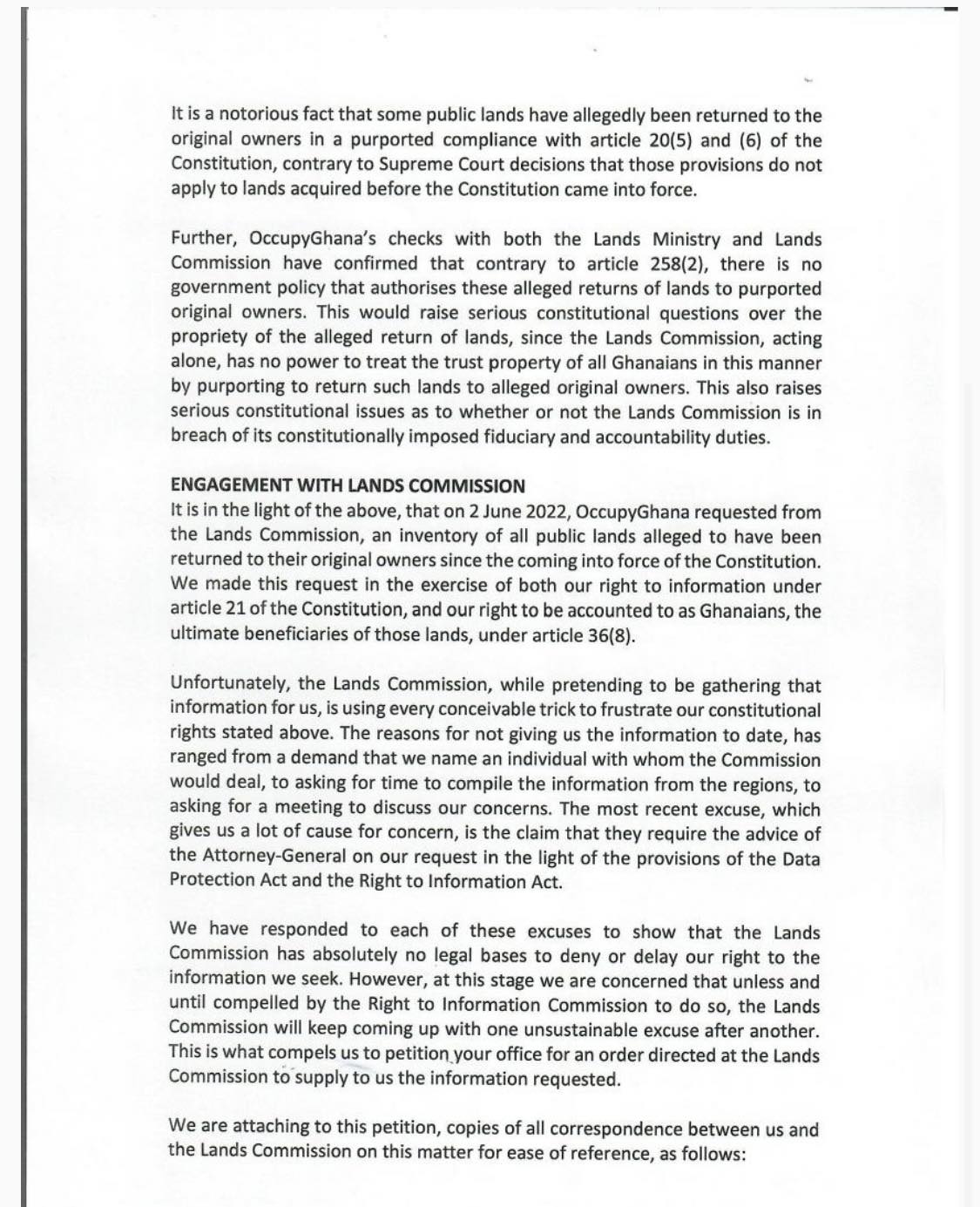 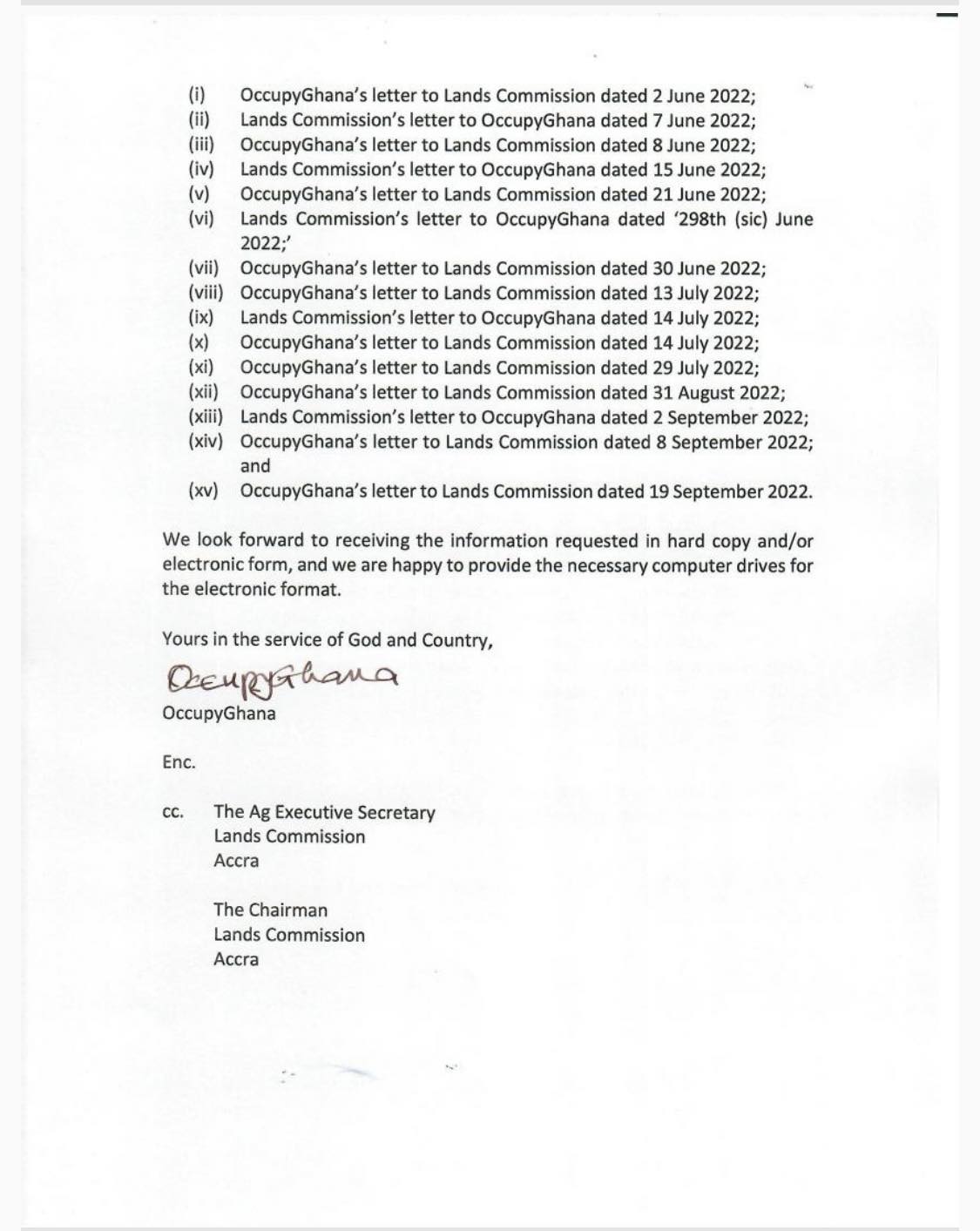