No SIM card will be blocked – Sam George assures 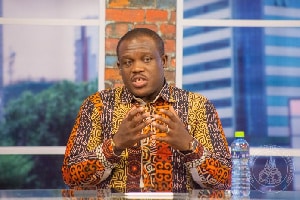 The Member of Parliament (MP) for Ningo-Prampram, Sam Nartey George, has assured Ghanaians who have not been able to re-register their SIM cards that their cards will not be blocked after the Friday deadline.

The Minister for Communication and Digitalisation, Ursula Owusu-Ekuful, announced that the deadline for the SIM card re-registration is Friday, September 30, 2022.

The September 30 deadline is an extension of the initial deadline which was scheduled for July 31, 2022.

The minister said that the extension had become necessary owing to challenges such as delays in the rollout of a self-serving registration app and delays in the acquisition of Ghana Cards, which is the mandatory document for the registration.

“Upon consultation with the industry and in view of the challenges enumerated above, I have very reluctantly decided to grant a final conditional extension.

“The programme will be extended to September 30 to end on the anniversary of its commencement. That will give us one full year of SIM registration to be reviewed at the end of this month and any SIM that has not been fully registered by the end of August will be barred from fully receiving certain services including voice and data services. It will also be more expensive to use unregistered SIMs. The full range of punitive measures will be announced at another press briefing in September,” the minister stated.

The National Communication Authority, who affirmed the September 30 deadline for the exercise, announced that all SIM cards which have not been registered after the deadline will be totally blocked.

But, in a tweet shared on September 30, Sam Nartey George said that he is certain that no unregistered SIM card will be blocked after Friday.

“I am 100% confident that ABSOLUTELY NO SIM card would be blocked tomorrow!

“This is a victory for the Ghanaian people who are waiting on the NIA to produce their Ghana Cards for them. For God and Country,” parts of the tweet the MP shared read. 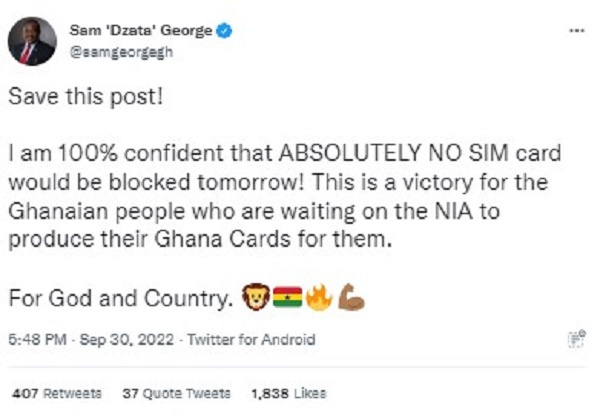