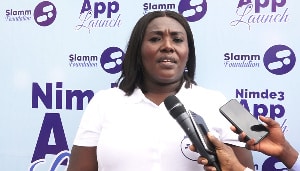 Francisca Boateng, the executive director of Slamm Foundation, has emphasized the significance of integrating digital technology to close the educational and literacy gaps in Africa.

Although almost half of the world’s population has access to the internet, just approximately 20 percent of people lack access to digital education, she noted.

On September 22, Mrs. Boateng claimed at the Accra launch of a new mobile application called “Nimde3” that it can considerably help close this divide while granting access to digital literacy for the people of Ghana and all of Africa.

“The rationale behind developing this mobile application is to bridge the literacy app and offer access to education. We are targeting to reach some 1 million people who can gain access by using the mobile application which offers wide-ranging IT education,” Francisca Boateng said.

“Nimde3’s goal is to educate masses with basic to intermediate Information Technology skills which can be done through respective local and foreign languages such as Ga, Ewe, Dagbani, Akan, Hausa and among others which are yet to be updated on the application in due course.”

She continued, “We also have English, French, Spanish, Igbo and Yoruba classes being taught on the Nimde3 mobile application.”

The Executive Director further touted the mobile application as one that is endowed with other key features and urged persons who seek to acquire more knowledge in IT to make use of the app.