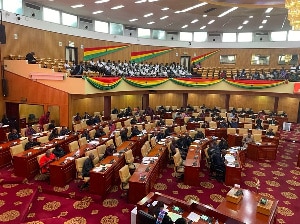 The minority in parliament have been wearing black to parliament since they reconvened on October 25.

According to the minority, their reason for wearing black is to communicate their dissatisfaction with the country’s current economic situation, including the cedi depreciation.

On Wednesday, October 26, almost all the MPs who showed up in parliament were dressed in black attires.

The Minority and Majority Members of Parliament seem to be on the same page following the call to remove the finance minister from office.

While the Minority in Parliament has filed a motion to have Ken Ofori-Atta sacked, the Majority also threatened to boycott the 2023 budget presentation if the finance minister is not relieved of his post.

The MPs explained that their position follows several concerns over the poor management of the economy, which has forced the government to seek IMF assistance.

While addressing the parliamentary press corps, the minority urged the majority to not relent on calling the finance minister out.

The Deputy Minority Chief Whip, Ahmed Ibrahim, noted “as representatives of the people and as duty bearers, we must move a motion to call for the end of the Finance Minister.