Rafiki was reportedly picked up by the security agencies in the early hours of Thursday following a purported Twitter post on November 6.

In the tweet, it was stated that that customers of commercial banks may not be able to access funds owing to a recent downgrade by a rating agency, Fitch. 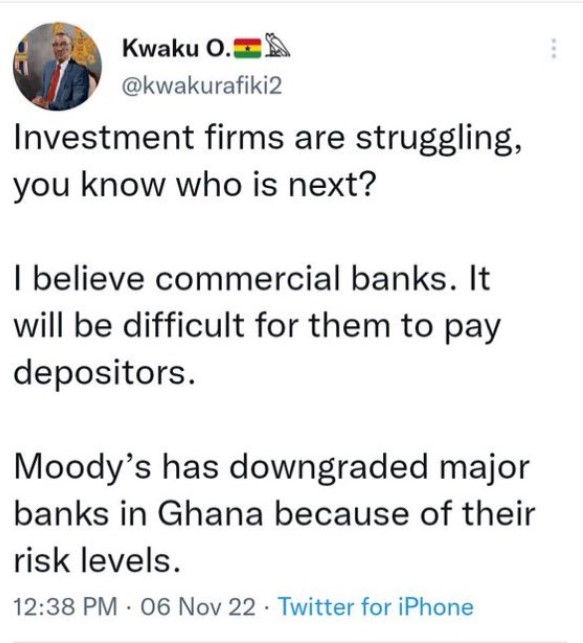 The NDC claims that its supporter is being held in unlawful detention and that no one knows where he is.

In a recent press conference, North Tongu MP Samuel Okudzeto Ablakwa indicated that the NDC would aggressively pressure President Akufo-Addo if Kwaku Rafiki is not released within the next 24 hours.

The family of the NDC activist’s client still do not know where Seth Asiedu is being held, according to Sammy Gyamfi, the activist’s attorney.

He continued by saying that no warrant had been obtained to search his room.

The father of Kwaku Rafiki, Kofi Asiedu in a distress call to JoyNews narrated circumstances leading to the arrest of his son.

“We heard people banging on our door. Open, Open! and then we were like who are those people? May be it was armed robbers, so we decided to go and look but they were banging. They even wanted to break in and then I just enquired and I saw that they were some three macho policemen.

“I asked them what has happened and they said no, they are not going to say anything until we open the door. We insisted but later on, we opened but when we opened, they were just asking where is the Itel phone? So we were like which Itel phone and they started searching. Later on, they saw the Itel phone with my boy in his room and they picked it and said you are the guy, let us go.

“I joined them and asked for the warrant. They said that they are from the National Security, and for them, they are not showing any warrant.

“When they brought him to the National security office and we enquired, they said they had taken him to the CID headquarters… we were trying to know the reason but we just got the information that he made a social media post regarding the banking sector issues. We are now looking for his whereabouts,” he stated.

Meanwhile, #FreeKwaku has been trending on Twitter since the arrest of Seth Asiedu. Many Ghanaians have called for the release of the NDC supporter and condemned the manner in which the young man was picked up.