Ace Music Producer, Morris Babyface has set the record straight over the artiste who sang the vocals for Kontihene’s hit song ‘Asesa’ back in the early 2000s.

This comes after a viral video on social media captured talented singer Nasty, known in real life as Rudolf Brekorang, claiming to be the person who did the vocals for the hit song and a few others.

In a Facebook post sighted by GhanaWeb, Morris Babyface has since dismissed the claims stating that he did not only do the vocals for the said song, but he also produced it.

“So people have been tagging me in this Guy’s video claiming he did the vocals on KONTIHENE’s ASESA song…Yes, I did the vocals, beat and produced the whole Nyankonton Album,” Morris Babyface wrote.

He also went on to call Nasty a liar.

Morris Babyface however offered some words on encouragement to Nasty and urged him to renew his relationship with God.

“His voice is still superb! He should get closer to God…God will transform him and use him mightily through music,” he added. 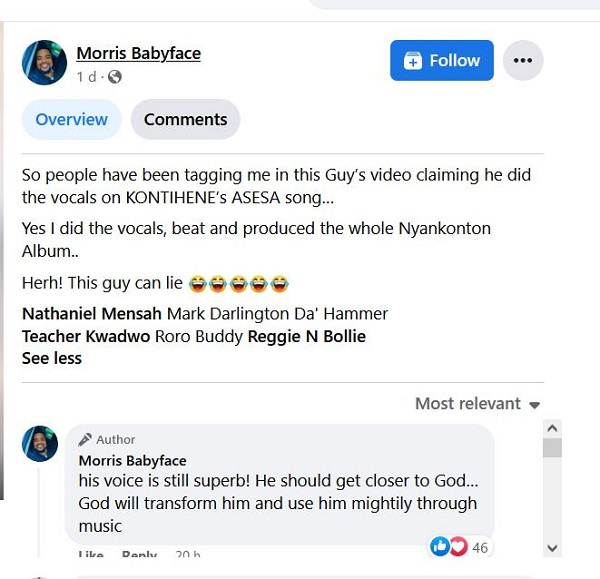 Meanwhile, Ghanaians on social media have called for assistance over the ‘poor state’ of the singer.

Nasty is a former member of the music group, Lifeline Family which was birthed on the soil of Adisadel College. His music career was however short-lived after he encountered illegal drugs and became addicted.

His career began in the early 2000s and he is famed for the chorus he delivered on T-Blaze’s hit song titled ‘Wo Sisi Ye Wo Ya’.