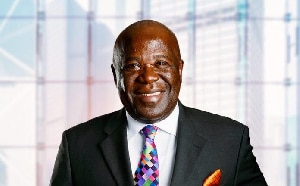 Sir Sam Jonah, a well-known businessman and the former CEO of Ashanti Goldfields, has clarified information about his net worth and wealth.

According to many sources, Mr. Jonah’s net worth is estimated to be approximately $1.2 billion.

Sam Jonah thinks Ghanaians frequently identify him with enormous fortune, which he considers highly inflated, even though this number hasn’t been confirmed.

Sir Sam Jonah stated during an appearance on the BBUM show on Ghana Television that despite being a wealthy businessman, he is more concerned with claims of his financial value than being defined by his principles.

“News of my wealth has been grossly exaggerated. Let me just say that my father will be turning in his grave if he thought that I will be defined by how much I am worth in monetary terms,” Sam Jonah said.

Touching further on his net worth claims, Sir Sam Jonah explained, “I think it’s a tragedy people want to be associated with their wealth…There are others who want that but unfortunately, I don’t. One because I don’t have that level of wealth and two, more importantly, I just feel it is crass and it’s not something you should be proud of that you’re defined by what people think you are worth”.

Speaking on some of the principles which have shaped him over the years, Sam Jonah pointed out “honesty, telling truth to power.”

“I stand for probity, to use the famous expression I stand for accountability and all the above,” He added.

Over 13 dead in gun attack at Russian school

‘Akufo-Addo is the source of Ghana’s economic woes but plays the blame game’ – Prof. Hanke

'Akufo-Addo is the source of Ghana's economic woes but plays the blame game' - Prof. Hanke