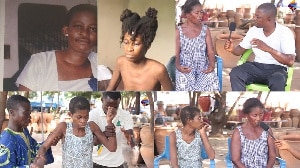 Elizabeth Atiako has been suffering from an undiagnosed condition for the past ten years.

The mother of Elizabeth, Madam Lydia Adofo, explained her daughter’s condition and pleaded for support in an interview on SVTV Africa with DJ Nyaami.

Elizabeth attended Gomoa Ahyiem Senior High School, but she was befallen by an unknown condition while at the examination hall and quickly rushed home.

“They rushed her to me, and we took her to a hospital in Essikuma, but all they said was malaria. I’ve visited many pastors, and I’ve spent a lot of money on her, but she doesn’t improve. Initially, she would shout suddenly, but it has stopped now. I took her to Ankaful (psychiatric hospital). But whenever drugs were administered, her tongue would pull out while she spun continuously. So I stopped,” she recounted.

The single mother of five pleaded for financial support for a thorough examination. Madam Lydia indicated that her daughter does not speak and often acts out aggressively when touched.

“I plead for support to help Lizzy get the help she needs because it is her well-being that I’m looking out for. I’ve sold all I have to cater to her, but the condition is still the same. It’s been ten years since it began, and I don’t know what to do,” she added.